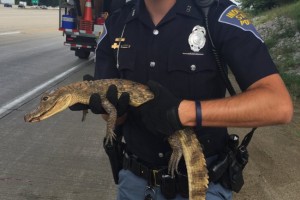 Troopers Find Live Alligator on I-465 in Indianapolis

Indianapolis – Shortly before 2:30 Sunday afternoon, troopers were dispatched to I-465 southbound near the 48 mile marker on reports of a live alligator on the shoulder. Upon arrival, a nearly two foot alligator was located, alive but injured. Troopers immediately contacted animal control personnel and made efforts to prevent the alligator from running into traffic. At one point a trooper actually picked up the animal to keep it from entering the traffic lanes of I-465.

Sadly, shortly before animal control arrived on the scene, the alligator died. There were visible injuries consistent with falling, or being thrown from a moving vehicle. Troopers believe this could be a case of someone improperly disposing  of, or releasing a domesticated reptile. Anyone with information about who may have owned this alligator is asked to call the Indiana State Police at 317-899-8577. The Department of Natural Resources was consulted for the proper disposal of the reptile.

I play on the radio from 7 am -1 pm weekdays on 98.9 FM WYRZ and WYRZ.org. Follow me on twitter @WYRZBrianScott or e-mail me at brian@wyrz.org.
Previous Avon Students “Pink Out” for Breast Cancer Awareness
Next It’s a Quaker thing: Plainfield celebrates heritage and tradition with annual parade and festival