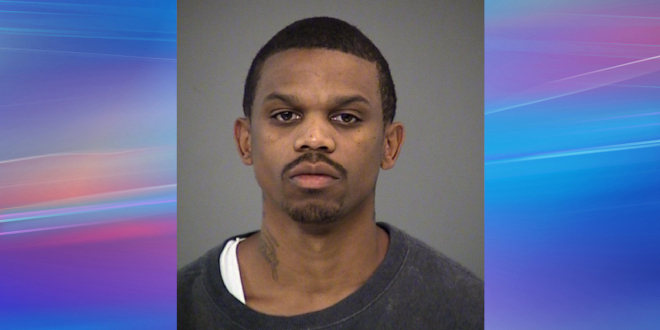 Indianapolis, IN – A traffic stop for an unsafe lane change early Tuesday morning led Troopers to arrest an Indianapolis man for outstanding felony warrants and other charges. Just after 1:30 this morning Trooper Brandon Fletcher was patrolling the area of 38th Street and Richardt Avenue when he saw a car drift from the left lane into the right lane then back to the left lane. He pulled the car over and after further investigation subsequently arrested the driver.

The driver of the vehicle, who was the only occupant, verbally identified himself to Trooper Fletcher. The first and second identities given were discovered to be false. After investigating further the man was identified as 24 year old Daquwon Richardson. When troopers were taking inventory of the contents of the vehicle prior to impound, a loaded .40 caliber handgun was found under the seat. Richardson was transported by ambulance to Eskenazi Hospital for reasons unrelated to this investigation. He was turned over to the Marion County Sheriff’s Office for incarceration.

A records check determined Richardson had outstanding warrants for Criminal Confinement and Armed Robbery. He also faces the following preliminary charges as a result of this traffic stop.

All accusations made in this release are alleged, all suspects are presumed innocent until and unless proven guilty in court. The charges listed are only probable cause for arrest, actual charges will be determined by the Marion County Prosecutor’s Office.

I play on the radio from 7 am -1 pm weekdays on 98.9 FM WYRZ and WYRZ.org. Follow me on twitter @WYRZBrianScott or e-mail me at brian@wyrz.org.
Previous Gov. Holcomb Makes Appointments to Various Boards, Commissions, and Task Forces
Next Butler Professor’s DNA Research Could Help Cure Genetic Diseases