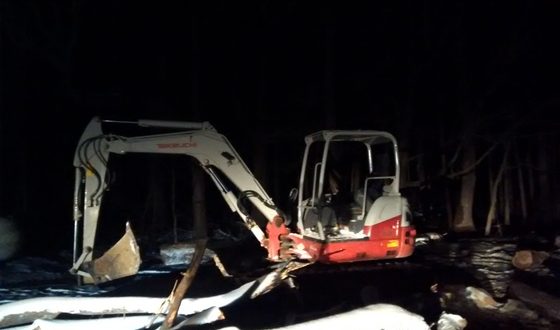 Parke County—This evening at 6:30, the Indiana State Police Post at Putnamville received a request for assistance from a Greenwood, Indiana man who was the victim of a construction equipment theft estimated at $50,933.

The man stated his 2016 Takeuchi Mini Excavator was stolen from a Greenwood area job site in December of 2017, and today, he received a tip from an Indianapolis construction rental store, indicating his machinery may be in the Rosedale area of Parke County. The business informed the victim that an unknown caller had requested they check a specific serial number for stolen. When they identified the item as stolen, the unknown caller and potential buyer of the equipment he thought was legitimately for sale, gave the business a possible location of the equipment.

Acting on this information, along with other details provided by the victim, Master Trooper Todd Brown, Senior Trooper Mike Laney, Parke County Sheriff’s Deputy Chris McCann, and the victim, went to the Bradley A. Thompson residence at 4667 East Rosedale Road, in southern Parke County. Upon their arrival, the officers located the 2016 Takeuchi Mini Excavator in the driveway. A check of the serial number revealed it to be the one reported stolen by the victim. The equipment was then seized and the suspect arrested.

Bradley A. Thompson, age 34, was taken into custody and transported to the Parke County Jail on a preliminary charge of Possession of Stolen Property, level 5 felony.

I play on the radio from 7 am -1 pm weekdays on 98.9 FM WYRZ and WYRZ.org. Follow me on twitter @WYRZBrianScott or e-mail me at brian@wyrz.org.
Previous Juvenile Incarcerated after Chase in Vigo County
Next Indy Metro Homicide detectives investigating after male found dead in vacant home