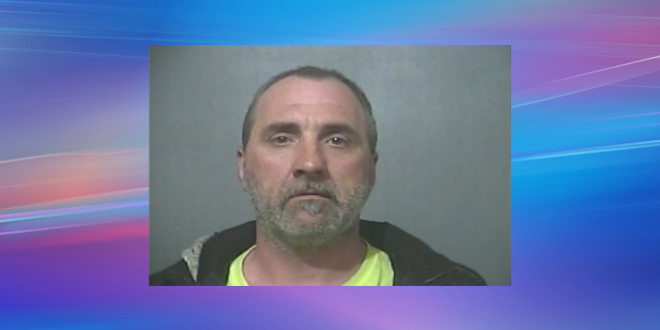 James Blair was incarcerated in the Vigo County Jail on charges of Assisting a Criminal (level 5 felony) and False Informing (Class B misdemeanor). Bond was set at $25,000 with no 10%.

The arrest stems from events surrounding the fatal police action of Michael R. Reynolds on March 06, 2018 at 2123 4th Avenue, Terre Haute. Reynolds was a wanted homicide suspect, escaped during the night of March 05 or the early morning hours of March 06 from a nearby police perimeter at 2214 1st Avenue. Reynolds made his way in the cover of darkness to the Blair residence at 2123 4th Avenue. They are known acquaintances.

ISP Lead Case Detective Tony Guinn and Detective First Sergeant Jason Fajt received video surveillance footage from the Terre Haute Police Department that showed a white Dodge pickup, driven by James D. Blair, enter the Terre Haute South Walmart parking lot at 3:51am on March 06 with suspect Michael R. Reynolds. Reynolds entered the store and purchased several personal items, including a cell phone. The video shows the white Dodge pickup leaving the parking at 4:36a.m. The video surveillance contradicted the original statements made by Blair related to the events of March 06, 2018. Those discrepancies, along with the video footage were the catalyst to Blair’s arrest.

At approximately 12:20p.m. on March 06, 2018, an armed Reynolds ran from the 4th Avenue home and presented a threat to ISP South SWAT members, at which time he was fatally wounded. Today, Vigo County Prosecutor Terry Modesitt ruled the police action shooting justifiable. Please contact the Vigo County Prosecutor’s Office for any further details of their ruling.

I play on the radio from 7 am -1 pm weekdays on 98.9 FM WYRZ and WYRZ.org. Follow me on twitter @WYRZBrianScott or e-mail me at brian@wyrz.org.
Previous OAG becomes fifth agency to offer services on the online business portal INBiz
Next Banks Calls for Ending Planned Parenthood’s Access to Title X Funds