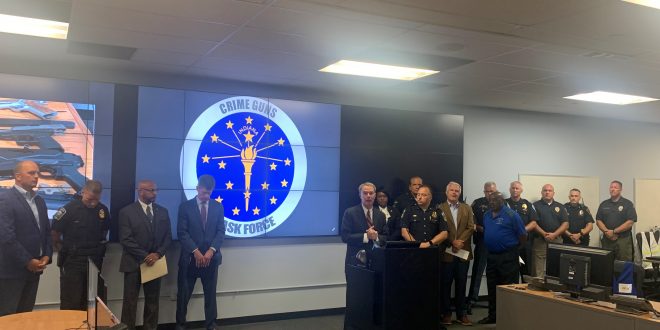 The expansion allows for a coordinated and uniform approach in processing, collecting, and analyzing gun evidence throughout Central Indiana. The newly formed task force will enhance the efforts of law enforcement agencies to track crime guns and shooting suspects who travel beyond county lines and throughout the state.

“We’re proud to build on a successful model here in Indianapolis, taking advantage of interagency partnerships to solve and prevent violent crimes,” said Indianapolis Mayor Joe Hogsett. “By working with law enforcement from throughout our region, we’re making sure our violence reduction efforts are as responsive as possible.”

“We have seen repeatedly that crime does not know county lines. That is why this regional task force is instrumental in allowing law enforcement from all over Central Indiana to work together, identify criminal behavior and stop the mobility of crime throughout our communities, “said IMPD Chief Randal Taylor.

Since its inception, CGIC has proven to be successful in removing illegal firearms out of the hands of criminals. Officers have:

The expansion was made possible by the Indiana General Assembly led by Representative Greg Steuerwald, who initially sponsored House Bill 1558. The state budget passed this year also appropriated $10 million for operating costs over the next two years.

The Indianapolis Metropolitan Police Department began the Crime Gun Intelligence Center (CGIC) in January 2019. It was initiated as part of the City’s strategy to reduce violent crimes by analyzing gun evidence to help identify shooters, and disrupt and prevent violence.

“ATF has a long history of working with our state and local counterparts, including the formation of a Crime Gun Intelligence Center with IMPD a couple of years ago,” stated Roland H. Herndon, Jr., Special Agent in Charge of ATF’s Columbus Field Division. “This regional CGIC is the next logical step. Criminals know no jurisdictional bounds, and by bringing together all of these agencies to share intelligence and investigate violent crimes as a unit, we are enhancing our commitment to our communities to address the violence wherever it is occurring.”

I play on the radio from 7 am -1 pm weekdays on 98.9 FM WYRZ and WYRZ.org. Follow me on twitter @WYRZBrianScott or e-mail me at brian@wyrz.org.
Previous INDOT to Close Bridges over I-465 in Marion County for Construction
Next Gov. Holcomb ceremoniously signs Law Enforcement Bill in Plainfield