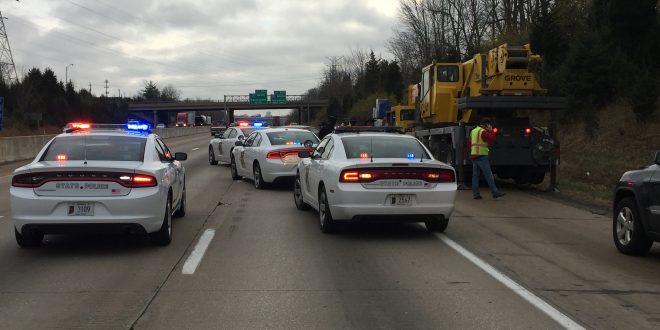 Pedestrian on I-465 Killed by Hit and Run Driver

Indianapolis, IN– A hit and run crash Tuesday morning on I-465 just after rush hour has claimed the life of a Rushville, IN man.

This morning at approximately 8:15 a.m. Indiana State troopers were notified of a personal injury crash on I-465 EB at the .08 mm (approximately one half mile west of I-65 SB).

Preliminary crash investigation and witness statements revealed that a crane being operated by Jeffrey A. Smith, 53, of Rushville IN, had mechanical issues and was parked on the right shoulder emergency berm of I-465 EB at the .08mm.The drivers’ side of the crane, or left side, was seven feet off of the right lane of I-465 with the emergency flashers activated. A mechanic from R.H. Marlin Inc., the owner of the crane, had arrived in a separate vehicle and was under the crane making repairs. Mr. Smith was standing on the emergency berm between the crane and the right lane of I-465.

According to witness accounts, a red or maroon Ford pickup truck went off the right side of I-465 onto the emergency berm and struck Mr. Smith with the front right of the vehicle. The pickup did not stop and continued EB on I-465. It is unknown at this time why the driver did not stop. The pickup should have extensive front right side damage. Mr. Smith was pronounced deceased at the scene. The mechanic was not injured.

Indiana State Police crash Reconstructionist and the Marion County Coroner’s office continue with the investigation. An autopsy will be performed on Wednesday.

Anyone with information regarding this crash is encouraged to contact crime stoppers at 317-262-TIPS (8477). You can remain anonymous.

I play on the radio from 7 am -1 pm weekdays on 98.9 FM WYRZ and WYRZ.org. Follow me on twitter @WYRZBrianScott or e-mail me at brian@wyrz.org.
Previous Governor-Elect Holcomb Leading First International Jobs Mission to the U.K.
Next North Salem United Methodist Church Receives Grant for HCCF 20th Anniversary Celebration