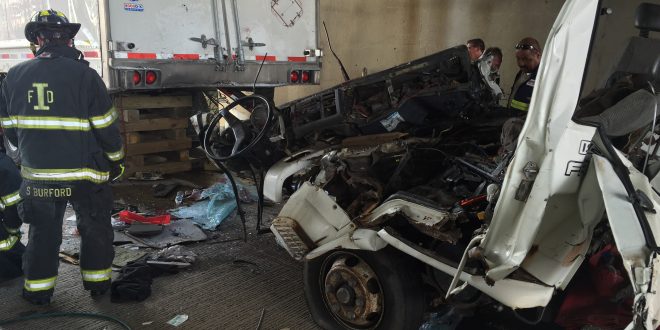 Indianapolis, IN – Around 3:45 Tuesday afternoon emergency crews responded to a serious crash on I-65 southbound at the 111.2 mile marker near the south split. A dump truck pulling a trailer rear-ended a semi tractor-trailer, entrapping both occupants in the truck. Traffic was slowing to a stop due to an earlier crash in the area. The two male occupants of the dump truck were severely entrapped and required extrication by the Indianapolis Fire Department. The driver of the semi tractor-trailer was not injured.

Garners Wrecker Service responded very quickly to to the scene and used their recovery equipment to assist IFD with the extrication of the victims. INDOT and IMPD responded to assist with traffic direction. 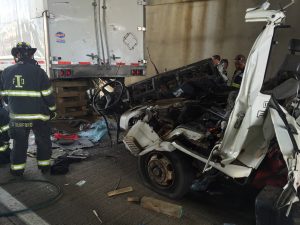 The Indiana State Police received information from Eskenazi Hospital this morning that the driver of the dump truck, 25 year old Jared Crump of Greenwood, succumbed to injuries sustained in the crash and was pronounced deceased at 1:17 a.m.. The passenger in that truck, 21 year old Nathan Davis of Indianapolis, also sustained serious injuries and is listed in serious condition at Eskenazi Hospital.

Douglas Watson, 56, of Indianapolis was the driver of the semi-tractor trailer and was not injured. After preliminary investigation, it appears traffic in the area had slowed to a stop when the landscaping dump truck, pulling a dump trailer, rear ended the semi in the right lane. All lanes of I-65 southbound were closed for approximately three hours while this crash was investigated and the wreckage was removed.

The Indianapolis Fire Department is deserving of credit for their outstanding and successful efforts to rapidly extricate the occupants from the truck.

I play on the radio from 7 am -1 pm weekdays on 98.9 FM WYRZ and WYRZ.org. Follow me on twitter @WYRZBrianScott or e-mail me at brian@wyrz.org.
Previous Community Tips Lead to Three Drug Related Arrests in Vermillion County
Next Argument turns deadly when man is shot and killed outside a residence