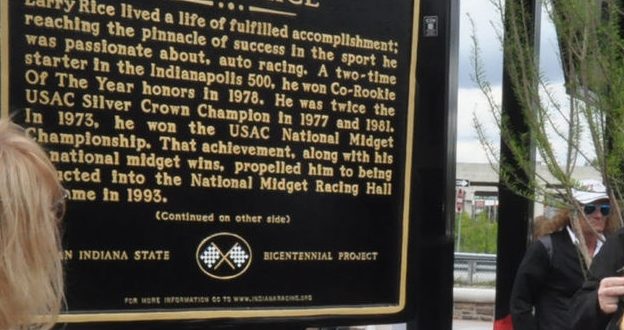 Earlier this week the Town of Brownsburg officially opened the new gateway at N. Green Street, just off of the I-74 exit. There was ceremony that involved a ribbon cutting with town officials and members of the Indiana Racing Memorial Association (IRMA) dedicating a memorial plaque for racing legend Larry Rice, who lived in Brownsburg. Rice was a three-time USAC National Champion. Rice was also the color analyst for “Thursday Night Thunder” and “Saturday Night Thunder” broadcasts on ESPN and ESPN2 from 1990 to 2002.

The plaque was placed next to a new shelter house along a walking trail at the gateway. The town hopes this will be used by the walking and bicycling community as well as a welcoming area for visitors to the town of Brownsburg.

The trail according to town manager Grant Kleinhenz, will be part of a walkway that will go underneath I-74. This will connect residents on the north side of Brownsburg to the south side of the town. The plan is to eventually connect the walkway to the B&O Trail.