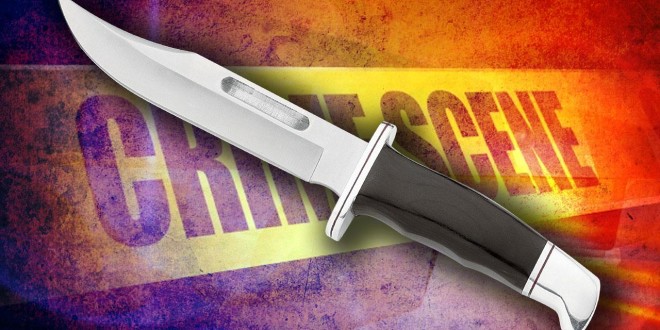 At approximately 6:30p.m., IMPD officers were dispatched in reference to a person stabbed at O’Reilly Auto Parts in the 3700 block of N High School Rd. Upon arrival, officers found a man suffering from at least one stab wound. Witnesses on scene advised that a male and female were arguing in a parking lot when an unknown third party began a verbal confrontation with the male arguing with the female. The two males then exchanged words and then the third party male suspect stabbed the other male. EMS personnel responded and transported the victim to Methodist Hospital in serious condition. Aggravated assault detectives responded for witness statements and to canvass the area for additional information. Detectives believe the stabbing occurred just inside the front door of the store.

The suspect was described as a black male, 5’5”-6’, muscular build, wearing a blue mechanic style jump suit, and armed with a knife. The suspect was seen fleeing the scene in a Late 90’s style, black Ford F-150 pickup truck, with big chrome wheels and large all-season tires. If you see the suspect, do not attempt to approach, call 911 immediately. Anyone with information regarding this incident is encouraged to contact Crime Stoppers of Central Indiana at (317)262-TIPS. Information may be given anonymously.

I play on the radio from 7 am -1 pm weekdays on 98.9 FM WYRZ and WYRZ.org. Follow me on twitter @WYRZBrianScott or e-mail me at brian@wyrz.org.
Previous IMPD detectives arrest Home Invasion Robbery suspect who was shot by victim
Next IMPD investigating a single vehicle crash that killed the driver and seriously injured her passenger