INDIANAPOLIS – IMPD investigators are looking into the circumstances surrounding a crash that killed a driver and seriously injured her passenger. 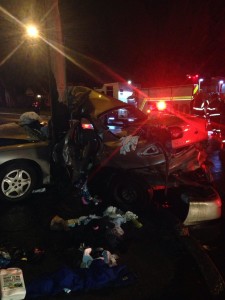 Around midnight Wednesday, officers were sent to the intersection of 26th St. and Sherman Drive on the report of a serious crash with entrapment. When officers arrived, they found an unresponsive female driver who was later pronounced deceased at the scene by EMS medicsl. A passenger, 22-year-old Devante Conner, was transported to Eskenazi Hospital in serious condition.

I play on the radio from 7 am -1 pm weekdays on 98.9 FM WYRZ and WYRZ.org. Follow me on twitter @WYRZBrianScott or e-mail me at brian@wyrz.org.
Previous Man stabbed during confrontation at Auto Parts store
Next Lt. Governor Holcomb and FSSA now accepting 2016 Golden Hoosier Award Nominations