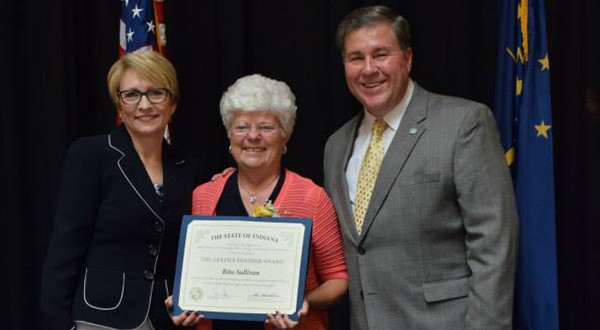 Indianapolis – Lt. Governor Eric Holcomb, in collaboration with the Indiana Family and Social Services Administration’s (FSSA) Division of Aging, has announced that nominations are now being accepted for the 2016 Golden Hoosier Awards. The award, which began in 2008, annually honors Hoosier senior citizens for their lifetime of service and commitment to their communities. The award is considered one of the highest honors given by the State of Indiana to senior citizens.

“Indiana is home to many seniors who transform their communities through their tireless service. By working with youth programs, volunteering at local food shelters, and so much more, these Hoosiers have a transformational impact on making our cities and towns even better places to live,” said Holcomb. “It is my honor to recognize these special individuals for their important contributions, and I encourage everyone to nominate a senior Hoosier that has dedicated his or her life to giving back.”

To be eligible for the Golden Hoosier Award, the nominee must currently be an Indiana resident, age 65 or older and have been a volunteer in the community for the past three years.

Additional guidelines and the nomination form are available here or at www.lg.in.gov.

Completed applications must be submitted online by April 29, 2016.

The awards will be presented to the selected 2016 Golden Hoosier recipients on Friday, June 3, 2016 at the Indiana Statehouse.

I play on the radio from 7 am -1 pm weekdays on 98.9 FM WYRZ and WYRZ.org. Follow me on twitter @WYRZBrianScott or e-mail me at brian@wyrz.org.
Previous IMPD investigating a single vehicle crash that killed the driver and seriously injured her passenger
Next Knowing your rights as a voter