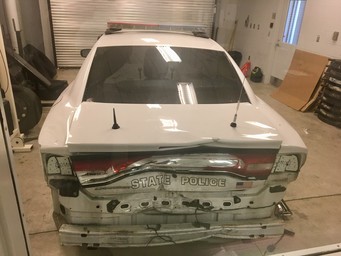 For troopers working out of the Indianapolis Post, heavy holiday travel coupled with slick roads resulted in numerous crashes and calls for service the entire weekend.  Troopers stayed busy Friday through Tuesday answering more than 300 traffic related calls for service.

Troopers responded to 150 non-injury crashes and 25 personal injury crashes in the seven county district.  They also assisted 106 motorists disabled along the highways and helped 24 drivers that slid-off the road.  Many of these crashes and slide-offs could have been prevented had motorists just slowed down and reduced their following distances, commented Sergeant Trent Smith, Indiana State Police Public Information Officer.

Trooper Nicholas Cox wasn’t immune to the chaos as his police car was also struck.  He was rear-ended while working a crash along I-465 near the US-52 exit on the east side of Indianapolis.  The subject who struck Cox had a suspended driver’s license and was arrested.  Two other Indianapolis troopers were also hit by motorists over the weekend.  None of the trooper’s or other parties involved were injured.

I play on the radio from 7 am -1 pm weekdays on 98.9 FM WYRZ and WYRZ.org. Follow me on twitter @WYRZBrianScott or e-mail me at brian@wyrz.org.
Previous Suspect Sought in Sullivan County Bank Robbery
Next Governor Eric Holcomb Directs Flags to be Flown at Half-Staff