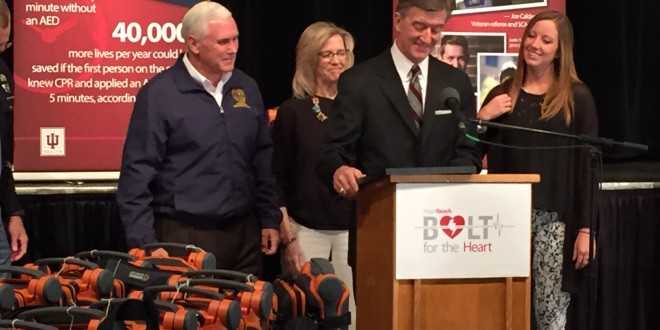 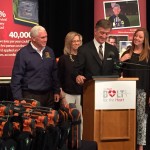 The donation of the AED’s to the state police was borne the result of an experience Pierre had while running in the 2010 Boston Marathon.  During that race Pierre witnessed another marathon runner suffer a cardiac arrest.  That runner was saved by an AED.

This inspired Pierre to collaborate with Heart Reach Carmel and establish the Bolt For The Heart 5K Family Thanksgiving Run, of which 2015 was the fourth year for the run.  Since its inception, this 5K run has grown from 41 runners to nearly 2,000 that participated this past Thanksgiving Day.

Each year since the run started 100% of the proceeds have been used to purchase AED’s for donation to not for profit organizations.

In 2015, the Board of Directors of Bolt For The Heart identified the Indiana State Police as the recipient of AED’s from funds raised in the 2015 Thanksgiving Day run, which ISP Supt. Carter was also a registered runner.  In fact Supt. Carter ran the entire 5K run in full state police uniform!

Enough money was raised to donate 50 AED’s to the Indiana State Police.  The AED’s presented to the state police today will be strategically placed in more rural parts of Indiana where a state police officer could be the first to arrive at a medical emergency.

At today’s press conference it was also announced the Board of Directors of Bolt For The Heart designated the Indiana State Police as the ‘primary benefactor’ to continue receiving AED’s until every state police road patrol car is equipped with this life saving device.  There was also a surprise announcement that enough money was raised to purchase five more AED’s that will be presented to the ISP in late April.

Also present at the press conference was state police Corporal Dan Becker, accompanied by Rick & Amanda Thacker, grandchildren of German Rivera.  On Dec. 28, 2015, German Rivera suffered a heart attack while in a car with his adult grandchildren.  They pulled into the ISP Lowell Post to seek assistance.  Rick Thacker shared their story how the AED at the state police post was used to administer a shock to revive his grandfather.  After follow-up medical attention, Mr. Rivera made a full recovery and returned to his home in Florida.

One of the many highlights of today’s event was the presentation, by Governor Mike Pence, of a Sagamore of the Wabash to Pierre Twer.  This is the highest honor an Indiana Governor can bestow upon a citizen in recognition of their distinguished service to the State of Indiana.

At the conclusion of the press conference attending troopers were issued their AED’s and placed window stickers on their patrol cars to easily identify the police vehicle was equipped with an AED.

I play on the radio from 7 am -1 pm weekdays on 98.9 FM WYRZ and WYRZ.org. Follow me on twitter @WYRZBrianScott or e-mail me at brian@wyrz.org.
Previous Methamphetamine Production Site Found in Woods near Terre Haute
Next Governor Pence Signs Road Funding, Regional Cities Bills Into Law