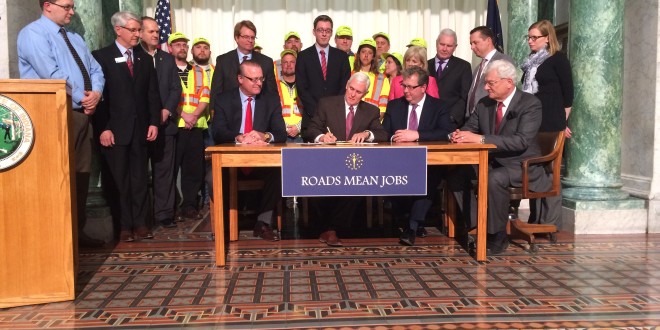 “I’m pleased to sign these bills that commit more than $1 billion in state and local infrastructure maintenance and fully funds our regional cities initiative,” said Governor Pence. “While our roads and bridges rank above the national average, Hoosiers know that roads mean jobs. These bills make clear our commitment to further improving the Crossroads of America and will spur economic development projects and improve the quality of life in regions across our state.” 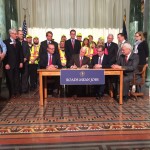 Specifically, HEA 1001 provides $328 million from excess reserves and Major Moves 2020 for the preservation of state and local roads and bridges over the next two years. SEA 67 makes available $430 million of Local Options Income Taxes (LOIT) reserve account for locals to spend on roads. Additionally, HEA 1001 provides $186 million in state reserves for the Local Roads and Bridge funding over the next two years, and provides $277 million over the next four years by redirecting an additional 1 and ½ pennies of the gasoline use tax to local roads to be phased in over two years; $100 million in funding will be available each year going forward providing long term road funding for locals. 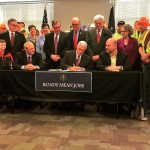 HEA 1001 allocates $42 million for the Regional Cities initiatives, ensuring all three regional development plans – North Central, Northeast, and Southwest Indiana, receive state funding. Together, these plans outline 100 quality of place projects totaling more than $2 billion in combined public and private investment. More than half of these planned projects, including new riverfront developments, revitalized downtowns and expanded trail systems, are currently scheduled to be completed by the end of 2018. Governor Pence will hold ceremonial bill signings in the North Central and Southwest Indiana regions. Details will be provided at a later date.

I play on the radio from 7 am -1 pm weekdays on 98.9 FM WYRZ and WYRZ.org. Follow me on twitter @WYRZBrianScott or e-mail me at brian@wyrz.org.
Previous ISP Receives Donation of 50 Automatic External Defibrillators; Organizer of Donation Receives Sagamore of the Wabash
Next Governor Pence Signs Legislation Affirming Indiana’s Support of Israel