ISP Putnamville Investigating Interstate 70 Shooting that Results in One Death

Putnam County—Indiana State Police Detectives from the Putnamville Post, with assistance from the Putnam County Sheriff’s Office, are currently investigating the shooting death of a 33-year-old black male believed to be from Columbus, Ohio. Investigators believe the shooting occurred in a vehicle that was westbound Interstate 70 just east of Exit 41 near Cloverdale.

Preliminary investigative information has led officers to believe that four individuals were traveling from Columbus, Ohio to the state of Missouri.  While en-route, two individuals in the back seat of the vehicle entered into an argument. During the disagreement, one rear seat passenger fired multiple gunshots, from what is believed to be a handgun, into the victim’s torso. After the shooting, the occupants of the vehicle found their way to Putnam County Hospital where they relinquished the victim to the emergency room staff and immediately left. Also leaving behind a witness. Law enforcement were initially looking for the vehicle involved, a white 2016 Kia Sedona van with Ohio registration GPF6801, along with two black males. 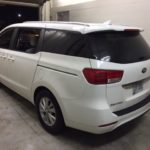 At approximately 2:00a.m. this morning, a Putnam County Sheriff’s deputy located the suspect vehicle westbound on State Road 240 near County Road 500 East. The vehicle was stopped approximately one-half mile north of Indianapolis Road on Round Barn Road near Greencastle. PCSO deputy and a Greencastle PD officer took two black males into custody without incident. ISP and PCSO detectives are currently interviewing the two individuals. When and if an arrest is made, that information will be released at that time. The van was taken to the Putnamville Post for processing.

Indiana State Police detectives from the Putnamville Post, along with the Putnam County Sheriff’s Office, have arrested two males related to the death investigation of Mario L. Edwards Sr. of Columbus, Ohio. Edwards was allegedly shot in the torso by another male passenger during an argument while riding along I-70 in a passenger van near Cloverdale. The group was traveling from Columbus, Ohio to Missouri. The incident occurred late Sunday evening, May 8. Both incarcerated in Putnam County.

Not charged at this time in relation to shooting.

An autopsy is scheduled for later this week.

Anyone with information in this case or the whereabouts of the Kia van are urged to call the Indiana State Police Putnamville Post at 765-653-4114 or the Putnam County Sheriff’s Office at 765-653-1810.

I play on the radio from 7 am -1 pm weekdays on 98.9 FM WYRZ and WYRZ.org. Follow me on twitter @WYRZBrianScott or e-mail me at brian@wyrz.org.
Previous Interstate Traffic Stop in Putnam County Yields Fraudulent Credit Cards
Next Rollover Semi Closes I-65 in Tippecanoe County