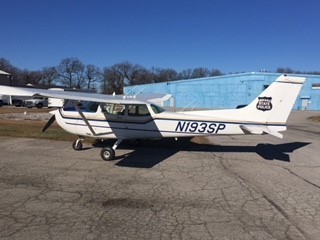 ISP is Watching Your Speed from Above

Putnamville—As Memorial Day weekend approaches and travel volumes appear to be increasing, the Indiana State Police Air Section has been assisting with the speed enforcement efforts of the Putnamville District.

On Wednesday, May 23 from 3pm to 6pm on US 41 in southern Sullivan County, and today from 8am to 11am on State Road 63 in northern Vermillion County, Indiana State Police Sergeant Lee Wright piloted his Cessna 172 Skyhawk, high above the roadways to detect speeding motorists. In the six hour campaign, troopers issued (38) citations and (22) warnings. The highest speed was 89 miles-per-hour in a 60mph zone.

Sergeant Lee Wright would detect speeding vehicles below, utilizing his VASCAR (Visual Average Speed Computer and Recorder) and a set of pre-determined painted lines on the roadways edge. Sergeant Wright would then radio the units below and guide them to the target vehicle to ensure the correct vehicle was stopped for enforcement action.

Motorists are reminded that Operation Pull Over Click It or Ticket is ongoing and runs through June 3. ISP and our local law enforcement partners will be targeting seatbelt and child restraint violations, as well as dangerous, impaired, and aggressive driving.

Drivers can expect to see periodic air patrols throughout the 2018 year.

I play on the radio from 7 am -1 pm weekdays on 98.9 FM WYRZ and WYRZ.org. Follow me on twitter @WYRZBrianScott or e-mail me at brian@wyrz.org.
Previous Donnelly Helps Senate Pass Bipartisan Reforms to Congress’ Outdated Workplace Harassment Policies
Next IMPD announces Indy 500 Race Day Traffic Patterns