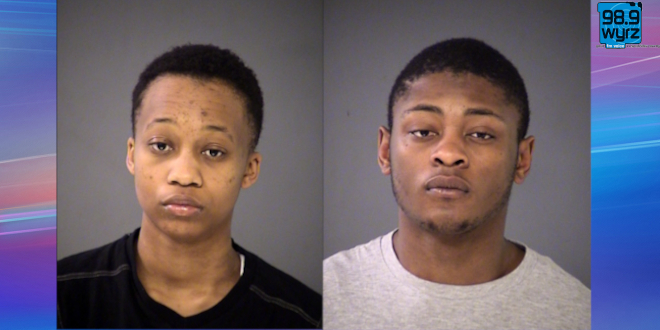 IMPD quickly apprehends armed robbery suspects on the north side

INDIANAPOLIS –  On Friday, April 2, 2021, at approximately 4:44 pm, Indianapolis Metropolitan Police Department (IMPD) North District middle shift officers responded to an armed robbery of a person in the 2700 block of E 38th Street. The victim stated that he was robbed by two individuals, one of them armed, after leaving an auto parts store.

Officers responded to the scene and actively searched the area. Almost immediately, two people matching the description of the suspects were located behind a nearby building and were taken into custody without incident. During a search of the suspects, property allegedly taken during the armed robbery was located. In a nearby treeline, officers discovered a firearm that is believed to have been used by the suspects.

An IMPD robbery detective responded and took over the investigation.  At the conclusion of the investigation, 20-year-old Diamond Bible and 18-year old Ladarreon Austin were both placed under arrest for their alleged role in the robbery.

Anyone with information about this incident should call Crime Stoppers of Central Indiana at 317.262.8477 or (TIPS).  Citizens can also download the mobile P3tips app for Apple or Android phones to submit a mobile tip, or go to www.CrimeTips.org to submit a web tip. You will remain anonymous and may be eligible for a cash reward of up to $1000 if the information leads to a felony arrest.  Only tips submitted directly and anonymously to Crime Stoppers are eligible for these cash rewards.

I play on the radio from 7 am -1 pm weekdays on 98.9 FM WYRZ and WYRZ.org. Follow me on twitter @WYRZBrianScott or e-mail me at brian@wyrz.org.
Previous Fire on Owen-Putnam State Forest is quickly contained
Next Indy Music Strategy Presents 3 Year Plan