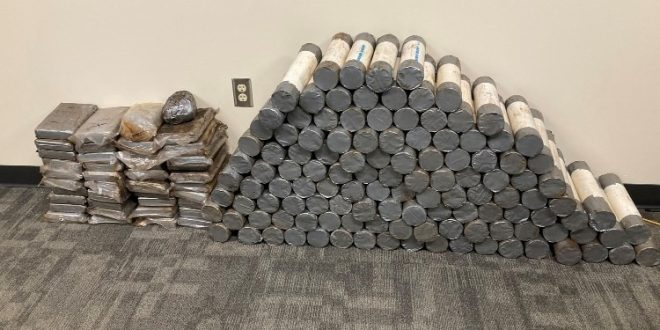 Hendricks County – This afternoon at approximately 1:30 p.m., an Indiana State Police Trooper stopped a Chrysler van on Interstate 70 near the fifty-nine-mile marker for unsafe lane movement.  The driver was identified as Ester Osegueda, age 32 of Porteville, California.  The passenger in the vehicle was identified as Adam Lopez, age 27, of Tulare, California. During the conversation with the two occupants, the trooper observed criminal indicators and a subsequent investigation led to a search of the vehicle.  During that search, the trooper discovered 134 pounds of crystal methamphetamine and 90 pounds of fentanyl concealed in the cargo area. The drugs originated from Memphis, Tennessee, and were destined for Indianapolis, Indiana.  The estimated value of the narcotics is two million dollars.

Both subjects were taken into custody and transported to the Hendricks County Jail where they are currently being detained.

I play on the radio from 7 am -1 pm weekdays on 98.9 FM WYRZ and WYRZ.org. Follow me on twitter @WYRZBrianScott or e-mail me at brian@wyrz.org.
Previous Off-duty Conservation Officer helps save a life
Next IMPD Homicide Detectives Make Arrest in Homicide Investigation