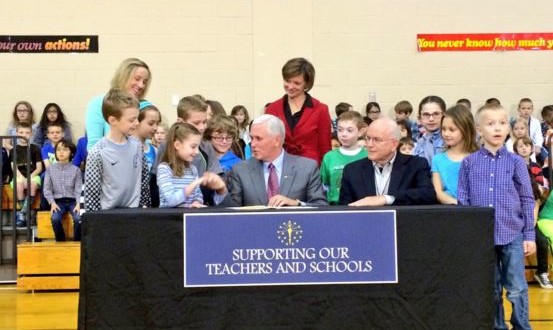 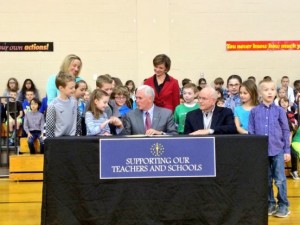 Indianapolis – Governor Mike Pence today joined teachers and students at Eagle Elementary School in Zionsville to sign House Enrolled Act (HEA) 1395, which eliminates the ISTEP test, effective July 1, 2017. The bill, which was authored by Rep. Bob Behning (R – Indianapolis), also establishes a 23-member panel to study alternatives to ISTEP, and requires that members are appointed by May 1, 2016. The panel includes the Superintendent of Public Instruction and her four appointees, the Commissioner of Workforce Development, the Commissioner of Higher Education, the Chairperson of the Senate Education & Career Development Committee, the Chairperson of the House Education Committee, a member of the State Board of Education, five Governor’s appointments, four President Pro Tempore appointments and four Speaker of the House appointments.

“By signing House Enrolled Act 1395, we’re taking the first step toward eliminating ISTEP and ensuring that multiple perspectives are considered as Indiana develops its next iteration of assessment and accountability of our schools,” said Governor Pence. “I’m also grateful to sign into law bills that will help ensure students in Indiana receive an excellent education in a safe and nurturing environment, and that working teachers who take in additional responsibilities may receive recognition and compensation for their efforts.”

Photos from today’s bill signing can be found attached.

To follow legislation as it reaches the Governor’s desk, visit http://in.gov/gov/2016billwatch.htm

I play on the radio from 7 am -1 pm weekdays on 98.9 FM WYRZ and WYRZ.org. Follow me on twitter @WYRZBrianScott or e-mail me at brian@wyrz.org.
Previous Donnelly, Sessions Call for Missile Defense Investments in Letter to President Obama
Next Early Morning Chase Ends in Arrests in Clay County