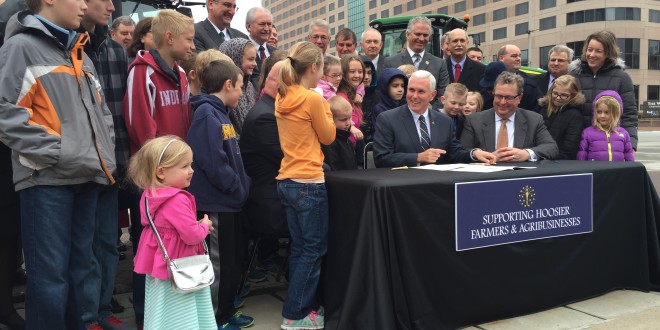 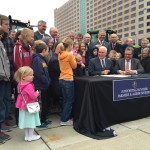 “I was pleased to sign into law Senate Enrolled Act 308 and Senate Enrolled Act 238, and I’m thankful for the bipartisan support in the Indiana General Assembly who helped get these bills to my desk,” said Governor Pence. “Indiana is blessed to have a rich agricultural tradition that starts on the farm and extends to thousands of agribusinesses, and these bills will help ensure the Hoosier farmers and businesses across our state receive the tax relief they deserve, and can better work together on soil conversation practices across our state.”

“I commend the Governor, members of General Assembly and all those involved with the passage of these two laws, which are major victories for Indiana agriculture,” said Ted McKinney, Director of the Indiana State Department of Agriculture. “We have nearly 60,000 farming operations in our state, so by making tax relief available, while strengthening our conservation efforts, these laws go a long way to ensure that Indiana agriculture not only remains strong, but also sustainable for future generations.”

I play on the radio from 7 am -1 pm weekdays on 98.9 FM WYRZ and WYRZ.org. Follow me on twitter @WYRZBrianScott or e-mail me at brian@wyrz.org.
Previous Hendricks County CAC first in Indiana to bridge families and forensics with therapy dogs
Next Indiana State Teachers Association Executive Director Resigns