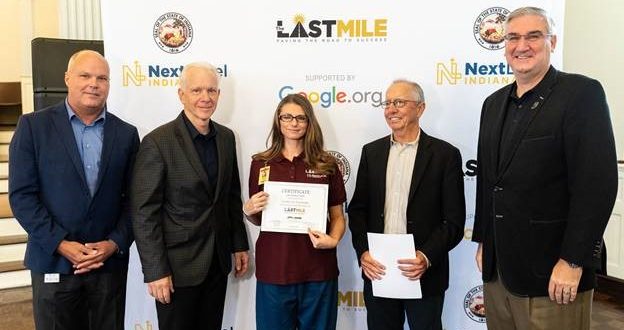 INDIANAPOLIS – Gov. Eric J. Holcomb today joined the Indiana Department of Correction and The Last Mile to celebrate the graduation of offenders who have completed the computer coding program at the Indiana Women’s Prison.

The Last Mile provides computer coding training with the ultimate goal of aligning graduates with gainful employment upon release. In 2018 as a part of Gov. Holcomb’s Next Level Agenda, Indiana became the first state outside of California to adopt this successful coding program. There, 100 percent of graduates of The Last Mile secure employment upon release—with a 0 percent recidivism rate.

The Last Mile is now serving five Indiana correctional facilities, close to a third of its total classrooms nationwide with 67 active students. Class members learn web programming languages, such as HTML, CCS and JavaScript. Beyond these technical coding skills, they also learn about how businesses function, working as a team, giving and accepting constructive criticism, building confidence, and how to pivot when they are heading in the wrong direction.

Gov. Holcomb looks on as Char’Dae Avery presents a computer coding project she has been working on as a part of The Last Mile program.

Gov. Holcomb speaks directly to the graduates and encourages them to continue making transformational life changes.

I play on the radio from 7 am -1 pm weekdays on 98.9 FM WYRZ and WYRZ.org. Follow me on twitter @WYRZBrianScott or e-mail me at brian@wyrz.org.
Previous Wrong Way Drunk Driver Crashes into Dump Truck on I-65
Next This Week at the Brownsburg Farmers Market