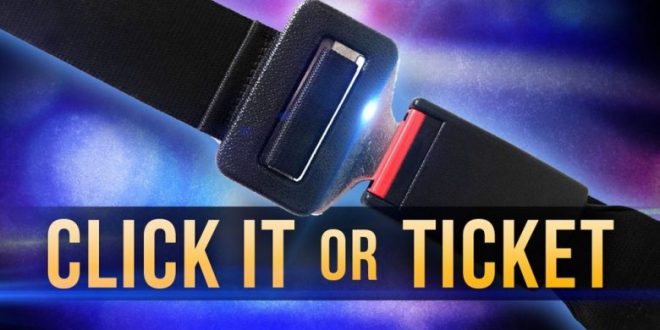 Click It or Ticket Campaign Reminds Motorists to Buckle Up

On any given day, more than 90 percent of motorists can be found wearing their seat belts. Unfortunately, the small percentage of people who choose not to buckle up make up a disproportionate amount of the fatalities that occur every year on Indiana roads.

It’s a concern that the Indiana State Police Putnamville Post is working to address this spring by participating in the national Click It or Ticket enforcement campaign. From May 17 to June 6, officers will be out in greater numbers seeking to educate motorists about the importance of wearing a seat belt.

The high-visibility patrols are paid for with funds from the National Highway Traffic Safety Administration (NHTSA), administered by the Indiana Criminal Justice Institute (ICJI).

“Part of our job as law enforcement is to educate motorist, reminding both drivers and passengers that buckling up isn’t just a suggestion, it’s the state law,” said Lieutenant David Cox, Putnamville Post Commander. “So please make sure that your phone is down, that everyone is buckled up in the car, and just drive. Doing this will allow you to arrive at your destination safely.”

Between 2015 and 2019, seat belts have saved more than 69,000 lives in the U.S., according to NHTSA. Despite knowing the benefits, people still refuse to buckle up, a choice that too often can end in tragedy.

Last year, more than 800 people were killed on Indiana roads, of which, 565 occurred in passenger vehicles. Sadly, 364 of those, or 6 out of 10, were not wearing seat belts.

Out of any age group, male drivers, particularly those between the ages of 15 and 34, were the most likely to be found not wearing a seat belt at the time of a crash. Additionally, individuals not wearing seat belts were three times more likely to get injured in a crash when the driver was speeding and seven times more likely when the driver was impaired.

According to the Indiana State Police headquarters, troopers will be writing citations and conducting high-visibility patrols during the day, but especially at night, when unrestrained driving is at its peak (midnight to 4:00 a.m.). Under Indiana’s primary seat belt law, officers can stop and cite drivers and passengers just for failing to wear a seat belt.

Drivers can also be cited for each unbuckled passenger under the age of 16, and children under eight must be properly restrained in a federally approved child or booster seat.

Throughout the campaign, troopers will be taking a no-excuses approach to seat belt enforcement, which means anyone caught not wearing one will receive a citation.

Parents and caregivers can choose the safest car seat for their child by visiting TheRightSeat.com, or to find a certified Child Passenger Safety Technician, who can inspect and assist with the installation of a car seat, visit www.childseat.in.gov.

I play on the radio from 7 am -1 pm weekdays on 98.9 FM WYRZ and WYRZ.org. Follow me on twitter @WYRZBrianScott or e-mail me at brian@wyrz.org.
Previous Missing kayakers found in Wayne County
Next Kroger to hold hiring fair at all stores on May 22