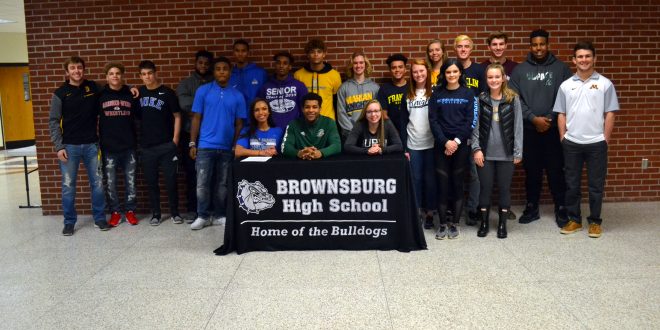 Brownsburg’s Antrez Baker will continue his education and his football career as he signs to
join the Ohio University Bobcats. In his time as a Bulldog, Baker was All-County, All-HCC
Conference, and All-State in both his junior and senior football seasons. He was the Indiana
Defensive Lineman of the Year in 2017 and emerged as a leader of the team, generating lots of
school spirit on the sidelines during games. BHS Varsity Head Football Coach John Hart says,
“Antrez has unlimited ability and has an opportunity to play exceptionally well at the highest
level.”

Bulldog tennis player Hailey Blood will study and continue her tennis career at Marian
University. A four-year varsity player for Brownsburg, Blood was Academic All-State in 2017
and 2016 Mental Attitude recipient for the Bulldogs. Varsity Head Tennis Coach Karen Starkey
says, “Hailey will enter the Marian University tennis program battle-ready and match-proven.
Her impact will be felt immediately on the courts as well as in the classroom.”

Manchester University welcomes Brownsburg senior Samantha Campbell to play volleyball
and continue her education with the Spartans. Campbell earned Academic All-State Honorable
Mention in 2017, the BHS Volleyball Sportsmanship Award in 2016, Most Improved in 2015, and
Mental Attitude in 2014. Brownsburg Volleyball Head Coach Bob Yeager shares, “Sami was a
player that always sought opportunities, in season and out, to improve her skills. Her attitude
set a positive example for her teammates and led her to leadership roles. We are looking
forward to following her volleyball career and wish her the best of luck!”

After his senior season, Brownsburg basketball standout Damon Craig will head north to study
and play for the Pilots of Bethel College in Mishawaka. Craig earned All-County and All‑
Sectional Team honors in 2017. While looking for a strong finish to the season with Craig and
Bulldogs, BHS Varsity Head Basketball Coach Steve Lynch says, “We are very happy for Damon
and wish him well as he continues his playing career at Bethel College.”

Dequincy Davis will continue his football career and education with the Cougars of the
University of Saint Francis in Fort Wayne. Davis earned an All-HCC Conference Honorable
mention his junior year and played receiver, defensive back, and special teams for the Bulldogs.
According to BHS Varsity Head Football Coach John Hart, “Very few players in 6A football match
‘Duke’s’ athleticism and ability. His athleticism is incredible and we wish him well at Saint
Francis.”

Bulldog Kyle Davis will play football and continue his education at Thomas More College in
Crestview, Kentucky. A standout on defense and special teams BHS Varsity Head Football
Coach John Hart says Davis clearly loves to play the game. “Kyle showed resilience and
versatility as an athlete and a football player. His abilities will transfer well to the college level
and we wish him the best of luck.”

BHS soccer player Alison Hieston will continue her education and her soccer career as she
signs to join the IUPUI Jaguars. Hieston was named to the All-District, All-HCC Conference, and
All-County teams in 2016 and 2017. She earned All-State Honorable Mention in 2016 and was
Third Team All-State in 2017. BHS Varsity Girls Soccer Head Coach Josh George expects great
things at IUPUI, “Alison will go down as one of the best attacking-minded players in BHS girls
soccer history. She will always be remembered for some of the big-time goals she scored. The
Lady Bulldog family wishes Alison good luck as she moves to her next challenge at IUPUI.”

Brownsburg’s JaiKob Johnson signed a National Letter of Intent to continue his education and
his football career at The College of DuPage. Johnson earned the Most Improved Player Award
for the Bulldogs last season and BHS Varsity Head Football Coach John Hart appreciates his
determination. “JaiKob did what we want all student-athletes to do – persevere through tough
times until work and talents are realized. He became the most physical offensive lineman on
our team and his toughness brought him to this day.”

Franklin College welcomes Brownsburg senior Jimmy Lawson to play soccer and continue his
education with the Grizzlies. As a captain in his senior season for the Bulldogs, Lawson earned
Academic All-State and All-County Honorable Mention. He was also part of the 2015 Sectional
Champion team. Brownsburg Varsity Head Soccer Coach Josh Brown says, “Jimmy was an
exemplary captain and teammate who strived to improve and gain new experiences daily. His
attitude and work ethic, which were instrumental in the team’s success this season, will help
him accomplish some amazing feats. I wish him all the best as he pursues his future at Franklin
College, and it was an honor to serve as his coach.”

Bulldog Tyon McKenzie will study and continue her basketball career at the University of Saint
Francis. McKenzie lettered all four years at BHS, was part of the All-County team the last three
years, part of the BHS County Champion team in 2015 and 2016, and Sectional Champion Team
in 2016. She also won the Defense Award for the Bulldogs in 2016. Varsity Head Girls
Basketball Coach Debbie Guckenburger shared, “Tyon’s athleticism is second to none. She
makes plays that no one else on the floor can make. Her athletic ability and unselfish play will
be a great asset to the University of Saint Francis. We will miss her greatly and wish her the
best of luck!”

Brownsburg runner Sydni Montgomery will run track and cross country and continue her
education at Marian University. Sydni earned Academic All-State Honorable Mention in 2017 in
her fourth season of varsity cross country. BHS Varsity Head Girls Cross Country Coach Craig
Beckner wishes her well. “Over the last four years, Sydni has shown great dedication to the
sport. She has battled through injuries when she could have given up, and came back this
season to her best times in four years. Aside from the great runner that Marian will be getting,
they will also have a top-notch student and person who will be successful in whatever path she
chooses.”

After qualifying for the IHSAA State wrestling tournament for the last two years, Brownsburg’s
Blake Mulkey has signed a National Letter of Intent to wrestle and continue his education at
Gardner-Webb University in North Carolina. Mulkey was State runner-up in 2017 and helped to
lead the Bulldogs to a Team State Championship as a Team Captain. A Semi-State Champion,
two-time Regional and Sectional Champion, four-time HCC Conference Champion and three‑
time County Champion, Mulkey will lead Brownsburg into the Semi-State this weekend. BHS
Varsity Head Wrestling Coach Darrick Snyder is confident in his wrestler as he joins the Bulldogs
of Gardner-Webb. “Blake is a freak athlete. He has an incredibly high ceiling. He didn’t get
serious about wrestling until 8th grade. I have never had a wrestler become elite in such a
short amount of time.”

Marian University welcomes Brownsburg’s Jacob Oppy to run cross country and track for the
Knights. Oppy earned Academic All-State Honorable Mention in 2017 and was the winner of the
Leadership Award for the Bulldogs in his senior season. Jacob was also a member of
Brownsburg High School’s club lacrosse team for three years. Brownsburg Varsity Boys Cross
Country Head Coach Nick Ballbach shares, “Jacob is a hard worker who is just now beginning to
realize his potential, and with year-round training in college he will do great things!”

Kyle Strakis will continue his football career and education with the Tigers of DePauw in
Greencastle. In his senior season, he led the Bulldogs at quarterback and earned All-HCC
Conference, Academic All-State, and Honorable Mentions for All-County, All-State, and All-Area.
Strakis also earned four varsity letters in golf while at BHS. BHS Varsity Head Football Coach
John Hart calls him “…the leader of our team. Kyle is the ultimate competitor who embraces all
challenges. He will excel at DePauw and I predict that someday he will be an incredible coach.”

Bulldog SeVonte’ Sumpter-Bey will play football and continue his education at Marian
University. At linebacker for the Bulldogs, SeVonte’ earned All-County, All-HCC Conference, All
State IFCA and Honorable Mention AP All-State, BHS Defensive Player of the Year, and The
Hammer Award. BHS Varsity Head Football Coach John Hart says Sumpter-Bey showed
tremendous improvement in his senior year. “He went from a struggling starter to the leader of
our defense. SeVonte’ is everything the sport of football teachers. He became a tough,
disciplined, relentless leader.”

Brownsburg’s Angel Tapia will play soccer and continue his education at Franklin College.
Angel earned All-County and Honorable Mention All-Conference in 2017. He was also the
captain of the 2017 team and contributed the most assists. Tapia was also part of the 2015
BHS Sectional Champion Team. BHS Varsity Head Boys Soccer Coach Josh Brown celebrates
his leadership. “Angel was a pivotal part of the team’s turnaround this season. His leadership
on and off the field, along with his constant gritty play, were major factors in the program’s
success. We look forward to watching you continue your career at Franklin and are excited to
continue to watch you grow and develop.”

Saint Mary-Of-The-Woods College in Terre Haute welcomes Brownsburg runner Emily Truax to
run cross country and continue her education. In her senior season, Emily was on the roster
for the State-qualifying BHS team. Brownsburg Girls Cross Country Head Coach Craig Beckner
says, “Emily has made many great contributions to our team over the past 4 years through both
her running and leadership. I look forward to seeing her build on this season’s performance
and know she has the ability to be a key part of the St. Mary’s team. Her work ethic and
positive attitude will guarantee her a very bright future.”

Brownsburg wrestler Nathan Walton will continue his education and his wrestling career as he
signs with Cumberland University in Lebanon, Tennessee. So far, Walton was a three time
State Placer, three-time Semi-State Champ, three-time Regional Champ, two-time Sectional
Champ, four-time County Champ, and four-time HCC Conference Champ. He’ll wrestle with the
Bulldogs at Semi-State this weekend after a Sectional and Regional Championship already this
year. Walton was also All-HCC Conference and All-County in Football his junior and senior
years. BHS Wrestling Varsity Head Coach Derrick Snyder enjoyed coaching this year’s Team
Captain, “It’s been an honor to coach Nathan. He has developed into an outstanding leader.
He makes everyone around him better. Nathan is the most explosive upper weight I have ever
coached. He can score from anywhere.”

Bulldog lineman Ronnie Williams will study and continue his football career at the College of
DuPage in Illinois. In his senior season, he was a difference-maker on the offensive and
defensive line for Brownsburg. Varsity Head Football Coach John Hart says, “We all understand
that athletics builds character. Ronnie showed that as long as you have a goal and a dream,
you have a chance. We wish him the best at the next level.”

I play on the radio from 7 am -1 pm weekdays on 98.9 FM WYRZ and WYRZ.org. Follow me on twitter @WYRZBrianScott or e-mail me at brian@wyrz.org.
Previous Nationally-ranked startup accelerator comes to Indiana
Next IMPD Chief Bryan Roach attends Crime Fighters Leadership Conference hosted by LAPD