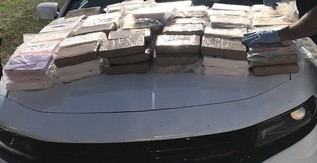 Hendricks County – Earlier this afternoon an Indiana State Trooper, who is assigned to the Drug Enforcement Section’s Criminal Interdiction Unit, made a significant drug seizure on I-70 near S.R. 39. Just before 3:00 p.m. the trooper pulled over a semi-tractor trailer for commercial motor carrier compliance check. During the course of the stop the trooper noticed indicators of potential criminal activity. A subsequent investigation and search of the semi-tractor trailer revealed four aftermarket hidden compartments in both the tractor and the trailer. In the compartments inside the tractor approximately 100 Kilograms of Cocaine was located. Inside a false wall in the trailer approximately 130 pounds of high grade marijuana was discovered.

The driver, 52 year old John Jay Jackson of of Michigan, was arrested on the following preliminary charges:

All crimes mentioned in this release are alleged, all suspects are presumed innocent until and unless proven guilty in the court of law.

I play on the radio from 7 am -1 pm weekdays on 98.9 FM WYRZ and WYRZ.org. Follow me on twitter @WYRZBrianScott or e-mail me at brian@wyrz.org.
Previous Woman-Owned Medical Consulting Startup Debuts Central Indiana Headquarters
Next IMPD Southeast Narcotics and Flex Team Seize Fentanyl, Heroin, and Cash after Serving Warrant