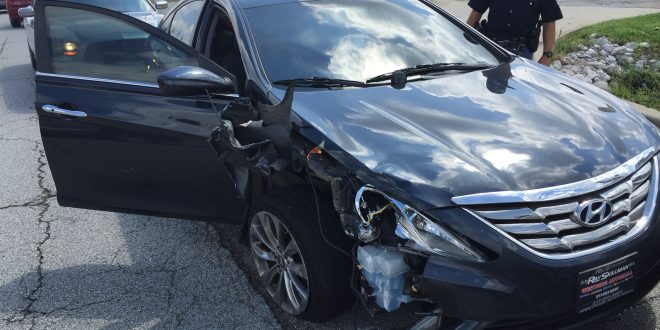 Indianapolis, IN – Wednesday afternoon shortly before 1:00, Trooper Corey Berfield was sitting stationary on the side of I-69 just south of 82nd Street in Castleton. Berfield’s police vehicle is equipped with automatic license plate reading technology, which alerted him to a passing vehicle. The alert was indicating the registered owner of a blue 2011 Hyundai, that had just passed, was wanted on a warranty for robbery. Berfield and Master Trooper Jeff Kastenschmidt, who was also in the area, quickly caught up to the Hyundai as it was exiting onto 82nd Street. The troopers initiated a traffic stop on 82nd Street westbound under I-69 and the suspect vehicle subsequently slowed to a stop near the intersection of 82nd Street and Bash Road. As both troopers stepped out of their cars, the suspect vehicle drove away at a high rate of speed. The troopers got back in their cars and gave chase westbound on 82nd Street.

Two blocks after the chase began, the Hyundai struck the rear end of a car stopped at the traffic light at Castleton Way. After the first collision, the suspect continued to drive westbound in the eastbound lanes of 82nd Street. While the suspect’s vehicle was still rolling he bailed out of the passenger door and fled north on foot. The troopers were able to quickly catch up to and apprehend the male suspect. The suspect’s vehicle continued to roll westbound after he jumped out and it struck a stationary eastbound vehicle. After securing the suspect, the troopers immediately checked all other drivers for injuries. The driver of the first car struck was complaining of minor pain and the Indianapolis Fire Department was summons to the scene to assist.

After checking all drivers at the scene for injuries, the only person transported to the hospital as a result of the crashes was the fleeing suspect.

The suspect was identified as 20 year old Fishers resident, Munajj Siddeeq. He was detained and transported to Eskenazi Hospital with complaints of pain from the crash. It was determined Siddeeq was the registered owner of the vehicle and had an active arrest warrant through Marion County for Robbery. Investigators also believe Siddeeq was under the influence of drugs. As a result of this incident he also faces the preliminary charges of:

– Resisting Law Enforcement with a Vehicle

– Leaving the scene of an injury crash

-Leaving the scene of a property damage crash

-Operating a vehicle while intoxicated

All preliminary charges are merely accusations of each crime, formal charges will be determined by the Marion County Prosecutor’s Office. All suspects are presumed innocent until proven guilty in court.

I play on the radio from 7 am -1 pm weekdays on 98.9 FM WYRZ and WYRZ.org. Follow me on twitter @WYRZBrianScott or e-mail me at brian@wyrz.org.
Previous Failure to Pay Inn Keepers Tax Results in Arrest
Next Commission Extends Deadline for 10-Digit Dialing in 317 Area Code to October 15th