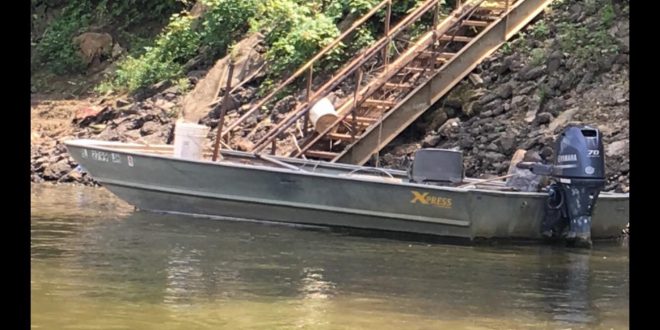 Vincennes man arrested for theft of a boat

Indiana Conservation Officers arrested a Vincennes (Knox County) man for theft of a boat after receiving information of suspicious behavior.

During the investigation it was found that Chad W. Taylor, age 39 of Vincennes, took a boat from the Wabash River during the early morning hours of Saturday August 17 without permission of the boat owner.

Later that morning a couple of fishermen advised they were flagged down by an individual matching the description of Taylor who needed gas.  They became suspicious because of the person’s demeanor and lack of knowledge of the boat.

A boat registration was provided and after talking to the boat owner it was determined the operator of the boat did not have permission to use the boat.

The boat in question and Taylor were found at a set of river cabins on the White River. Taylor admitted to taking the boat and was booked into the Knox County Jail.  The boat was returned to its rightful owner.

All charges are merely accusations and defendants are presumed innocent until proven guilty.

I play on the radio from 7 am -1 pm weekdays on 98.9 FM WYRZ and WYRZ.org. Follow me on twitter @WYRZBrianScott or e-mail me at brian@wyrz.org.
Previous Detectives with the Indianapolis FBI Violent Crimes Task Force seek the public’s assistance
Next 2019 Indiana State Fair sees a boost in attendance 17-day event draws nearly 879,000