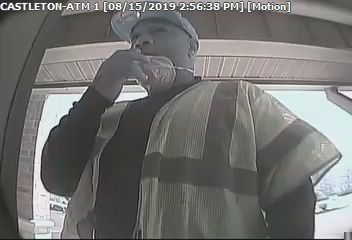 INDIANAPOLIS –Detectives with the Indianapolis FBI Violent Crimes Task Force seek the public’s assistance for information that would lead to the identity of the person depicted in the attached surveillance photo.
On August 15, 2019 at approximately 3:00pm, IMPD Officers  were dispatched to 7470 E 82nd St, at Indiana Members Credit Union, in reference to a robbery.  On arrival, Officers spoke with staff and confirmed that they had just been robbed.  A bank employee stated that suspect fled the business with an undetermined amount of money and there were no injuries.

The suspect is described as a black male, 5’7” with a heavy build, He was last seen on foot from the credit union.

The Indianapolis FBI Violent Crimes Task Force is conducting an active investigation into this incident. Anyone with information about the suspect’s identity or circumstance of this incident is urged to contact the Indianapolis FBI Violent Crimes Task Force at 317.595.4000 or Crime Stoppers of Central Indiana at 317.262.8477 or TIPS. Citizens can also download the mobile P3tips app for Apple or Android phones to submit a mobile tip or go to www.CrimeTips.org to submit a web tip. Information shared via Crime Stoppers should be considered anonymous and confidential and could be eligible for a cash reward of up to $1000 if the information leads to a felony arrest

I play on the radio from 7 am -1 pm weekdays on 98.9 FM WYRZ and WYRZ.org. Follow me on twitter @WYRZBrianScott or e-mail me at brian@wyrz.org.
Previous Visionary leaders awarded state’s highest agricultural honor
Next Vincennes man arrested for theft of a boat