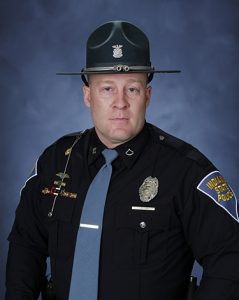 At this point, the investigation has determined that Officer McCrary attempted to conduct a traffic stop on the Honda Camry that Quentin Starke, age 44, was driving at 11th and Washington Streets in Columbus.  Starke fled in the vehicle before driving into a field east of State Road 11, south of Columbus.  Upon stopping and exiting his vehicle, Starke shot at Ofc. McCrary, who was still inside of his patrol vehicle.  Ofc. McCrary was grazed by a bullet, causing injuries to his head.  Starke then fled into a wooded area.  Ofc. McCrary was treated for his injuries at Columbus Regional Hospital before being released.

Shortly after 12:00 pm on Saturday, September 30th, Starke attempted to shoot Indiana State Trooper Eric Williams, who was searching the area with other Indiana State Police SWAT team members.  The round fired by Starke narrowly avoided striking the trooper.  Trooper Williams, a 15 year ISP veteran, returned fire, striking Starke.  Trooper Williams and other SWAT team members immediately provided medical attention to Starke and called medical personnel to the scene.  Starke died at the scene as a result of the incident.

An autopsy was completed on Quentin Starke at the Greensburg Hospital on Sunday, October 1st.  The autopsy indicated that Starke died as a result of the injuries he sustained when he was shot by Trooper Williams.

The investigation is ongoing.  At the conclusion of the investigation, the case will be turned over to the Bartholomew County Prosecutor’s Office for review.

I play on the radio from 7 am -1 pm weekdays on 98.9 FM WYRZ and WYRZ.org. Follow me on twitter @WYRZBrianScott or e-mail me at brian@wyrz.org.
Previous Introducing Our New Outdoor Classroom!
Next Elderly Missing Man Found Deceased