Two Indianapolis men face several charges after a traffic stop led to their arrest Tuesday night.  Indiana State Police uncovered a loaded handgun, oxycodone hydrochloride pills, more than 130 grams of marijuana and cash.  The traffic stop happened around 10:00 p.m. near the intersection of 42nd Street and Baker Drive in Indianapolis. 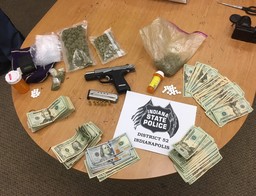 Senior Trooper Joel Flores stopped the driver for an equipment violation and quickly recognized the odor of marijuana coming from the vehicle as he spoke with the driver.  The driver was identified as 25 year-old Reginald Graves of Indianapolis.  A subsequent search of Graves uncovered a loaded 9mm Ruger handgun along with oxycodone hydrochloride pills and more than $1,500 dollars.  A backseat passenger in the car was identified as Marvin Dawayn Allen Jr., 26, of Indianapolis.  A pat-down search of Allen uncovered more than $500 dollars.  It was also later discovered that Allen had approximately 43 grams of suspected synthetic marijuana hidden in his underwear.

*All suspects are presumed innocent until proven guilty in a court of law.

I play on the radio from 7 am -1 pm weekdays on 98.9 FM WYRZ and WYRZ.org. Follow me on twitter @WYRZBrianScott or e-mail me at brian@wyrz.org.
Previous Help Preserve a Piece of Indiana State Police History
Next Secretary of State Connie Lawson introduces updated Indianavoters.com website