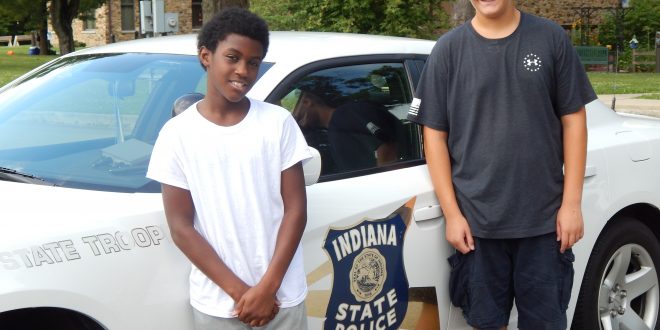 Tre'von and Wesley at camp

Indianapolis, IN – Earlier this year Trooper Josh Graves responded to a request from another trooper for assistance on a traffic stop on I-70 near Post Road. The only passenger in the vehicle was a young child, so while others troopers conducted the investigation, Trooper Graves asked the young man if he would like to sit in a police car. Graves engaged in conversation with the child and learned his name was Tre’von and he was 12 years old. For the next 15 minutes the two shared stories, aspirations and common interests with one another. In Josh’s words, “he just seemed like a great kid.” Tre’von was talking about school and how well he was doing by earning all A’s and B’s. He also spoke about his enjoyment of reading, especially Harry Potter Books. He later went into detail about his future plans to be a police officer, at which time Graves showed him the inside of his police car and explained to him what everything was. Graves told me “he’s just an awesome, smart kid. I asked him where he went to school and asked if it would be ok if I came to visit?” Of course he said yes and was very excited about having his new police officer friend visit his school.

After contacting school administrators, Trooper Graves paid a visit to Tre’von at Avondale Meadows Academy. While there, Josh learned from the principal, that Tre’von had recently come from another school and she was proud to report Tre’von is a classroom leader and a model student, earning very good grades. During the school visit Trooper Graves gave Tre’von a couple of books to read, each with a hand written note inside along with a phone number to reach him if needed.

A short time later Tre’von’s mother reached out to Trooper Graves and said Tre’von was looking for something to do over the summer to occupy his time. Trooper Graves immediately thought of the Indiana State Police Summer Camp, which he attended during his childhood, and thought it would be a great opportunity for the young man. Trooper Graves told Tre’von and his mother he would cover the $150 cost associated with attending the camp. After speaking with other troopers from the Indianapolis District, Graves quickly raised enough money to send Tre’von to the Indiana State Police Camp.

Wednesday July 6th, Trooper Graves picked Tre’von up in his police car, drove him to the camp being held at Anderson University. During the drive to the camp Tre’von shared his anxieties about the camp with Trooper Graves, who in turn calmed his fears and expressed to him how much fun he would have.

In an unrelated incident, First Sergeant Rich Myers met a young man named Wesley from Morgan County nearly four years ago during a traffic stop. Wesley, now 14 years old, and his sister were passengers in a car that was stopped by police. Myers spent time with both children during the investigation, which began a great friendship between him and the children. Wesley told Myers of his intention to one day become a police K9 officer. Myers kept in touch with Wesley, often inviting him along for public police programs and events. Wesley moved away from the area, but kept in touch with his good buddy Trooper Myers. Because of this great friendship, F/Sgt. Myers encouraged Wesley to attend an Indiana State Police Camp, which by chance is the same camp Tre’von is attending. Myers was able to stop by the camp today and spend time with his friend Wesley. “I’m sure with his positive outlook and engaging personality he will have no trouble obtaining his law enforcement goals. I’m very proud to call Wesley my friend,” said F/Sgt. Rich Myers.

I play on the radio from 7 am -1 pm weekdays on 98.9 FM WYRZ and WYRZ.org. Follow me on twitter @WYRZBrianScott or e-mail me at brian@wyrz.org.
Previous 2016 Cops Cycling for Survivors Bicycle Ride around Indiana
Next Governor Mike Pence Directs Flags Be Flown at Half-Staff Statewide to Honor Law Enforcement Officers Killed in Dallas Shootings