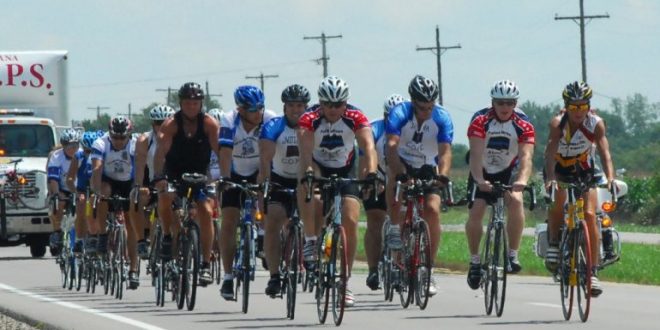 Indianapolis, IN –Monday, July 11, 2016, will mark the start of the 15th annual Cops Cycling for Survivors bicycle ride around Indiana. A departure ceremony will be held at 8:30 a.m. EDT in front of the Indiana State Museum (650 W. Washington St) in downtown Indianapolis. The cyclists will depart shortly after key note comments by survivors Carolyn Dudley and Jennifer Martin-Luskey.  2016’s ride celebrates 15 years of Gary Dudley’s vision of a ride to support law enforcement survivors and for the first time in 30 years, Indiana lost no officers to line of duty death in 2015.  2016 also honors ten years since Lt. Gary Dudley, Indiana State Police, and Deputy Chief Gary Martin, Lake County Sheriff’s Dept., were killed participating in the ride on August 22, 2006.   After the 9:00 a.m. departure from the museum, the cyclists will head east to Richmond.  For the second year in a row, Governor Mike Pence and First Lady Karen Pence will join the cyclists for the departure ceremony and ride for part of the first day.  The cyclists’ journey will last 13 days and cover nearly 1,000 miles bicycling the perimeter of Indiana honoring fallen police officers and their families.

Cops Cycling for Survivors Foundation, Inc. annual bike ride consists of active and retired police officers, law enforcement survivors, law enforcement family members and friends of law enforcement riding their bicycles around the perimeter of Indiana to raise funds and awareness of the sacrifices made by Hoosier law enforcement families across Indiana. Funds raised from this event are used to perpetuate the memories of officers killed in the line-of-duty and to aid surviving family members and co-workers of officers killed in the line-of-duty. Previously raised funds have been directly donated to foundations, scholarships and camps that have been started in memory of fallen officers or by Indiana survivors in honor of their fallen heroes.  In addition, funding has been donated to National Concerns of Police Survivors, the Indiana Chapter of Concerns of Police Survivors and Project Blue Light at the Indiana Law Enforcement Academy.

The ride is scheduled to conclude the afternoon of Saturday, July 23, 2016, at Crown Hill Cemetery, Heroes of Public Safety Section.  The closing ceremony will begin at 2:00pm EDT.  Indianapolis Colts long snapper Matt Overton will provide the closing message.  All are welcome to attend.

There will also be a stationary ride fundraising event on Monument Circle in front of Emmis Communication on Friday, July 8, 2016, from 7:00 am to 3:00pm.   Come out and meet some of the cyclists, sign the support truck, buy some Cops Cycling swag, donate, or just hang out.

The general route of the ride will be as follows:

Additional information on specific locations of meals and overnights can be found by clicking on the Calendar tab of the website. Click view calendar and the month of July. http://www.copscycling4survivors.org/events.php

For more information about the organization, donations made, or this year’s ride, visit their website: http://www.copscycling4survivors.org/ , or contact Rich Crawford, President of Cops Cycling for Survivors Foundation, Inc. at 317-650-8961.

I play on the radio from 7 am -1 pm weekdays on 98.9 FM WYRZ and WYRZ.org. Follow me on twitter @WYRZBrianScott or e-mail me at brian@wyrz.org.
Previous Nature Photos Sought for 2017 Hendricks County Parks & Recreation Wall Calendar
Next Troopers Mentor Two Young Men and Help them Attend Indiana State Police Camp