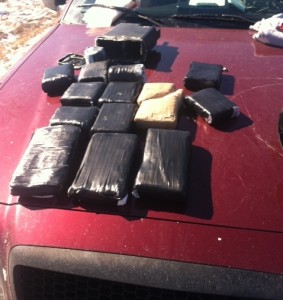 Morgan County–Thursday morning at 11:43, Indiana State Police Troopers from the ISP Drug Enforcement Section, stopped a 2008 Ford passenger car for an improper lane change on eastbound Interstate 70 near the 52 mile marker. During conversations with the driver, several indicators of possible criminal activity were detected. A search of the vehicle yielded approximately two (2) pounds of Heroin and twenty (20) pounds of Cocaine. The drugs were found throughout the passenger compartment and the trunk area. The street value was estimated at $360,000.00 (three hundred and sixty thousand dollars).

As part of Governor Pence’s Task Force on Drug Enforcement, this is yet another example of how the Indiana State Police is making an impact on the flow of illegal narcotics traveling into and through the state of Indiana.

I play on the radio from 7 am -1 pm weekdays on 98.9 FM WYRZ and WYRZ.org. Follow me on twitter @WYRZBrianScott or e-mail me at brian@wyrz.org.
Previous Donnelly on Veterans Choice Program: What our Veterans Are Going Through to Access Benefits is ‘Completely Unacceptable’
Next IMPD Hit-and-Run detectives look for a suspect in a hit-and-run crash that killed 23-year-old female