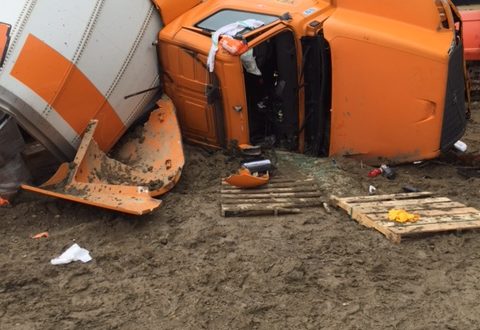 Troopers Investigate Rollover Semi Crash along I-70 in Vigo County

Vigo County—This afternoon at 2:15, Indiana State Police and other Vigo County emergency agencies responded to a tractor-trailer rollover crash that began in the eastbound lanes of Interstate 70 near the 11 mile marker and concluded down over the embankment into the construction zone work area of State Road 46. 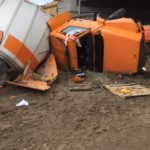 Preliminary investigation revealed a 2005 Volvo tractor pulling two box trailers, driven by 49-year-old Steven E. Stroot of Whiteland, IN., was eastbound on I-70 near the 11mm, when the unit drifted slightly off the roadway. Stroot attempted to correct the problem, but ultimately could not. The semi struck the guardrail and then traveled over the embankment into the SR 46 construction area. The tractor-trailer was operated under Yellow Freight Lines. 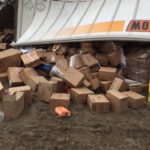 Steve Stroot was transported to Terre Haute Regional Hospital for treatment of neck and back pain. He was not cited.

I play on the radio from 7 am -1 pm weekdays on 98.9 FM WYRZ and WYRZ.org. Follow me on twitter @WYRZBrianScott or e-mail me at brian@wyrz.org.
Previous ISP Putnamville Investigating Death in Sullivan County
Next Vermillion County 911 Call Prompts Police Dispatch that Results in One Arrest