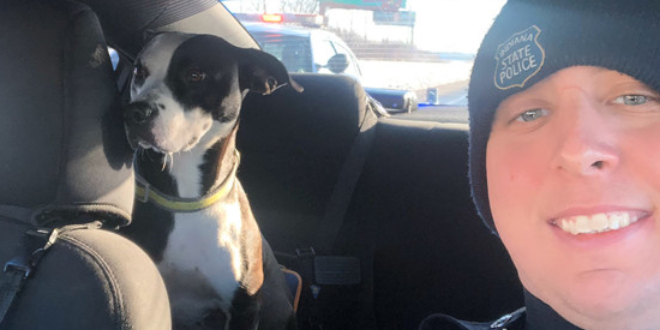 Indianapolis, IN – Tuesday afternoon a coordinated team effort led to the rescue a dog who escaped from a crashed vehicle on the city’s west side. Just after 3:00 p.m. 911 dispatchers received a call about a vehicle that ran off I-465 and rolled several times. As troopers were responding to the scene they began receiving information about a dog that had jumped out of the crashed vehicle and was running along the shoulder of the interstate. The first troopers on the scene, along with paramedics, assisted the driver, who suffered minor injuries. Meanwhile Trooper Brandon Alberts and Trooper Mike Wright began tracking down the dog. State Police Dispatchers along with Dispatchers from INDOT were able to utilize traffic cameras and relay information to troopers about the dogs location. Trooper Alberts caught up to the dog nearly two miles from the crash scene, he and Trooper Wright blocked a lane of traffic and were able to safely get the dog into a police car.

Investigating officers are not sure what caused the vehicle to run off the road. The driver was transported by ambulance to the hospital with non-life threatening injuries. After spending time with Trooper Alberts for a little while, the dog named Poppy, was released to a family member who came to the scene.  Poppy did not appear to be injured.

I play on the radio from 7 am -1 pm weekdays on 98.9 FM WYRZ and WYRZ.org. Follow me on twitter @WYRZBrianScott or e-mail me at brian@wyrz.org.
Previous Centerville Man Struck While Outside his Car on I-65
Next Hoosiers urged to practice ice safety