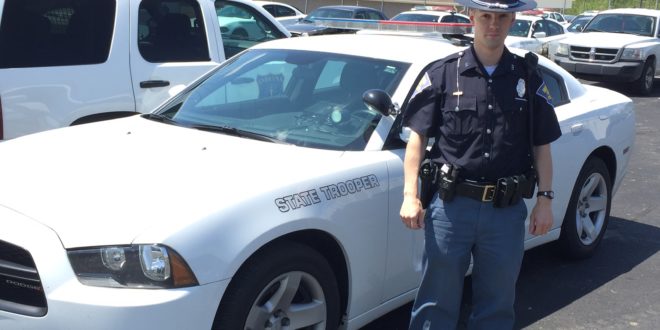 Trooper Christopher Fuhs was issued his patrol car for solo patrol May 17, 2016 after graduating from the Indiana State Police Academy in December 2014. The difference between his classmates getting their cars in April of 2015 and him getting his car just this month was because he spent over a year working for the US Army on deployment in Kuwait and Jordan.

After graduating from the academy, Fuhs spent one day at the Indiana State Police Post in Lafayette before being deployed by the army. Due to his deployment, he was not able to complete the training required at the district level to be issued his patrol car with the rest of the class. Fuhs was sent to Fort Hood, TX for training before spending three months in Kuwait and Jordan. While spending time overseas, he was injured and sent back to Fort Campbell, KY for recuperation and to finish out his deployment. In early February 2016 Fuhs was released from his active duty status and returned to the Indiana State Police at the Lafayette Post to finish out his training.

His training started with refresher courses on what was taught in the academy while he was a recruit. Fuhs then started his 17 weeks of riding with field training officers. Trooper Fuhs has received his state police car and is ready for solo patrol.

Trooper “Chris” Fuhs is a 2003 graduate of Harrison High School and a 2011 graduate of Purdue University with a bachelor’s degree in English. His college years were interrupted by his time with the US Army with five years of active duty while attempting to get his degree. His patrol area will include Benton, Warren, Fountain, and Montgomery counties. He resides in the West Lafayette area with his family.