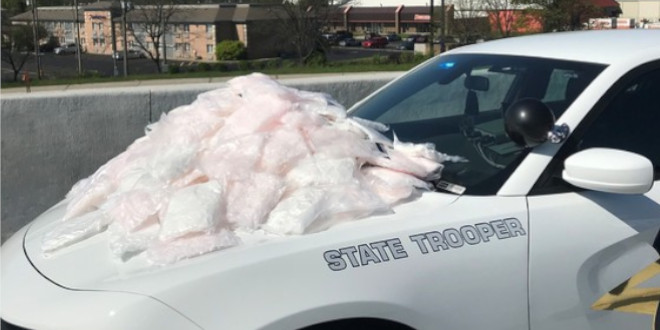 Trooper Locates 160 lbs of Methamphetamine in a Semi

Indianapolis, IN – A traffic stop for speeding led to the arrest of a California man on multiple drug charges. Friday May 7, 2021 at approximately 10:00 a.m., an Indiana State Trooper pulled over a semi tractor-trailer on I-65 in Indianapolis for speeding. While speaking with the driver of the semi the trooper could smell the odor of marijuana coming from inside the truck. The investigation led to the search of the semi and the subsequent discovery of approximately 162 pounds of methamphetamine and a small amount of marijuana. The driver, 27 year old Dejohntae Williams of Victorville California, was arrested and is facing pending federal drug charges.

The Indiana State Police was assisted in this investigation by the Department of Homeland Security Investigations and the United Stated Postal Inspectors. An arrest is based on probable cause, actual charges will be determined by the prosecutor upon review of the case. All suspects are presumed innocent until and unless proven guilty in court.

I play on the radio from 7 am -1 pm weekdays on 98.9 FM WYRZ and WYRZ.org. Follow me on twitter @WYRZBrianScott or e-mail me at brian@wyrz.org.
Previous Celebrate Visit Indiana Week May 2-8 with the Indiana State Nature Passport
Next Full Closure at the North Split to begin this week