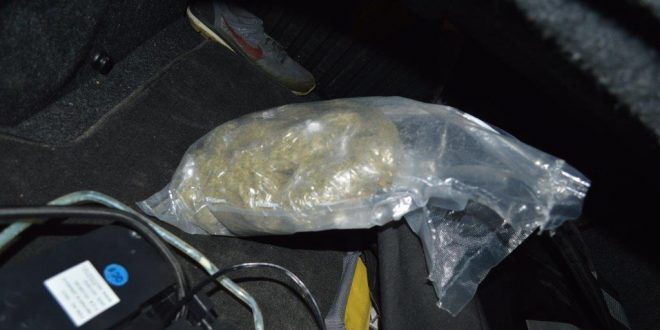 INDIANAPOLIS- On December 3, 2017, at 10:08 p.m., Indianapolis Metropolitan Police Department (IMPD) Southwest District officers conducted a traffic stop and could immediately smell raw marijuana coming from the vehicle.  Officers had the three males exit the vehicle and the men were secured.  Through the course of the investigation officers located in the trunk a large plastic bag with several sandwich bags full of a large amount of marijuana.  Also located in the vehicle were two other handguns.

24-year-old Dejuane Alexander, 24-year-old Jacobi Scruggs, and 22-year-old Kenneth Thomas were arrested on 12.3.2017 for Possession of Cultivation of Marijuana and Dealing Marijuana.  Mr. Alexander was also arrested for Carrying a Handgun without a License with a prior felony conviction within the last 15 years. All charging information will be released by the Marion County Prosecutor’s Office. The IMPD greatly appreciate the cooperation and tips provided by the community to make our city a safer place to live.

I play on the radio from 7 am -1 pm weekdays on 98.9 FM WYRZ and WYRZ.org. Follow me on twitter @WYRZBrianScott or e-mail me at brian@wyrz.org.
Previous Donnelly-Crafted, Bipartisan Regulatory Relief Package to be Marked Up in Banking Committee
Next Applications available for ICLEO program that assists future law students