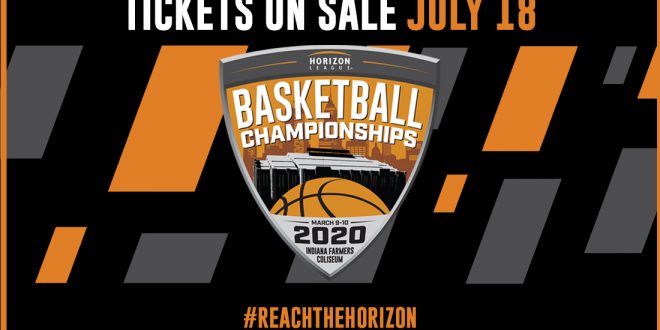 Tickets for the semifinals and championship games start at just $10. Fans that purchase a ticket before September 30 will receive $5 off. Eight teams – four men and four women – will look to advance to Indianapolis and #ReachTheHorizon March 9-10 at the Indiana Farmers Coliseum located at the Indiana State Fairground & Event Center.

All eligible teams will compete in this year’s Horizon League Basketball Championships. First Round and Quarterfinal games will take place at campus sites of the highest available seed. Each host school will announce its ticketing plans. Students of Horizon League schools, with a current student ID, may obtain a free student ticket at the host school box office.

The Horizon League Basketball Championships will continue to feature student tickets. Students of Horizon League schools, with a current student ID, can obtain a ticket at the Indiana Farmers Coliseum box office.

Every game of the tournament will be carried on ESPN networks, with the championships airing live on Tuesday, March 10.

For complete information on the 2020 Horizon League Basketball Championships go to HorizonLeague.com/Indy or follow @HorizonLeague on social media.

ABOUT THE HORIZON LEAGUE
The Horizon League is an NCAA Division I athletics conference comprised of 10 member institutions located throughout the Midwest’s major metropolitan cities. Headquartered in Indianapolis, the League and its members strive to be highly competitive athletically while committing to the total development of its student-athletes and creating a lasting impact on campus and in the community. For more information, visit HorizonLeague.com.

I play on the radio from 7 am -1 pm weekdays on 98.9 FM WYRZ and WYRZ.org. Follow me on twitter @WYRZBrianScott or e-mail me at brian@wyrz.org.
Previous This Week at the Brownsburg Farmers Market
Next Mark Fisher Named the Association of Chamber of Commerce Executives Forty Under 40 Award Recipient