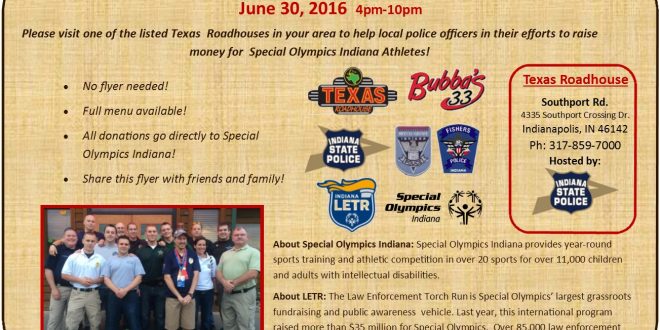 Indianapolis – The Indiana State Police and the Texas Roadhouse Restaurant in Southport are hosting a “Tip-a-Cop” fundraising event tonight, June 30th, from 4 p.m. until 9 p.m. The restaurant is located at 4335 Southport Crossing Drive, Indianapolis and all donations will go directly to Special Olympics of Indiana. A State Police K9 dog will be available for interaction from 4 p.m. until 6 p.m.

Tip-A-Cop® is part of the annual Law Enforcement Torch Run® (LETR) campaign. LETR, which includes an international series of relay runs and special events like Tip-A-Cop®, is presented by more than 144,000 law enforcement officers worldwide to help raise money and public awareness for Special Olympics. LETR is the largest grassroots fundraiser and public awareness vehicle for Special Olympics through which funds raised go directly to local programs in states or countries where the funds are generated.

I play on the radio from 7 am -1 pm weekdays on 98.9 FM WYRZ and WYRZ.org. Follow me on twitter @WYRZBrianScott or e-mail me at brian@wyrz.org.
Previous IMPD Homicide Detectives Investigate Fatal Shooting in the 3100 Block of Brouse Avenue
Next Local JAG Specialists Recognized at State Ceremony