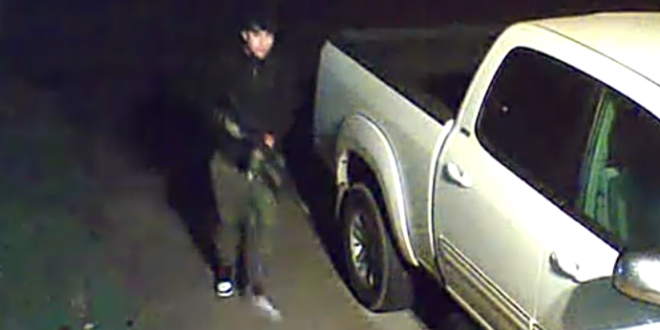 Indianapolis, IN – Detectives from the Indiana State Police are investigating a theft from an ISP vehicle. In the overnight hours of January 2 into January 3 an issued police handgun was taken from a marked state police vehicle parked in a private driveway. The theft occurred in the Pine Springs West neighborhood near 75th and Hague Road.

A surveillance camera on a neighboring home captured images of a white male carrying a rifle attempting to make entry into a white pick-up truck. Investigators believe these images were taken prior to the unlawful entry into the police vehicle, however the close proximity leads investigators to believe the same male suspect is responsible for the handgun theft. The rifle the suspect was carrying was not the weapon stolen from the ISP vehicle.

We are asking anyone who can identify the suspect or provide further information to contact Crime Stoppers at 317-262-8477 or at www.crimetips.org.

The suspect in the below images is considered armed and dangerous. Should you encounter him please call police immediately.

All suspects are presumed innocent until and unless proven guilty in the court of law.

I play on the radio from 7 am -1 pm weekdays on 98.9 FM WYRZ and WYRZ.org. Follow me on twitter @WYRZBrianScott or e-mail me at brian@wyrz.org.
Previous MPD Homicide Detectives Make Arrest in Homicide Investigation
Next Indiana Department of Education Announces New Climate Change Education Framework in Partnership with Purdue