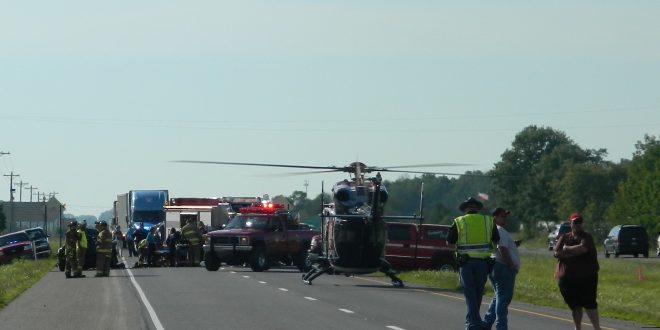 Shelby County, IN – A 27 year old South Carolina man has died from injuries sustained in a crash July 14th on I-74 in Shelby County. According to investigators, Thursday evening at approximately 6:07 p.m.  Ryan Scheer was driving a green Toyota on eastbound near the 109 mile marker, when he rear ended a semi tractor-trailer. The semi, driven by Peter Wall of Winkler Nebraska, had slowed down on the interstate due to stopping traffic ahead. Road construction appears to be the reason for all lanes of eastbound traffic to slow down.  An emergency medical helicopter was called to the scene to transport Sheer to IU Methodist Hospital, where he succumbed to his injuries three days later.

This is an ongoing investigation and there is no further information to release at this time. Eastbound lanes of I-74 were closed while this crash was investigated and the wreckage was removed from the scene. Anyone who may have witnessed this crash is asked to call the Indiana State Police at 317-899-8577.

I play on the radio from 7 am -1 pm weekdays on 98.9 FM WYRZ and WYRZ.org. Follow me on twitter @WYRZBrianScott or e-mail me at brian@wyrz.org.
Previous Police Revive Man from Suspected Opioid Overdose in Fulton County
Next Indiana State Police Seeks Recruits for Capitol Police Section