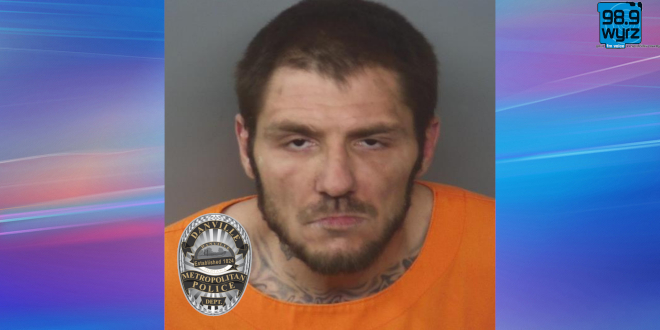 After nearly 7 hours of refusing to surrender himself, 37-year-old Robert Lee Douglas Jr. of Indianapolis was taken into custody by officers with the Danville Metropolitan Police Department.

At approximately 6:15 PM last evening, Danville officers went to a South Kentucky Street address to serve felony warrants on Douglas for a parole violation for a serious violent felon in possession of firearm and another for theft. Danville officers had been alerted by the Fishers Police Department that Douglas may be hiding within our jurisdiction.

When Danville Officers arrived, Douglas was on the porch and fled inside the home. When officers eventually entered the home, after yelling unanswered commands, a female exited a rear bedroom and advised that Douglas had a knife and had not allowed her to leave the bedroom.

Officers spent the next 7 hours utilizing several tactics to get Douglas to surrender peacefully. Just after 1:00 AM, Douglas was found hiding in the crawl space of the home and was taken into custody without incident by Danville officers. Douglas had entered the crawl space through a small vent at some point during the standoff.

Along with his outstanding felony warrants, Douglas was charged with resisting law enforcement and criminal confinement. He was booked into the Hendricks County Jail at 2:05 AM.

I play on the radio from 7 am -1 pm weekdays on 98.9 FM WYRZ and WYRZ.org. Follow me on twitter @WYRZBrianScott or e-mail me at brian@wyrz.org.
Previous Early Voting Begins Today for 2022 Primary Election
Next Hendricks County legislators urge governor to call special session if U.S. Supreme Court overturns Roe v. Wade