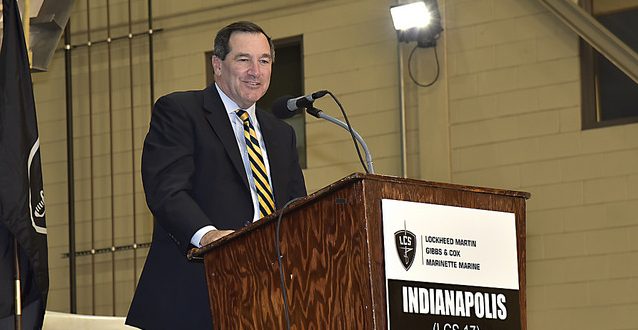 Marinette Wis. — Today, U.S. Senator Joe Donnelly and his wife Jill Donnelly participated in the keel-laying ceremony for LCS-17, a U.S. Navy littoral combat ship that will be named the USS Indianapolis. Both Senator and Mrs. Donnelly gave remarks at the ceremony in Marinette, Wisconsin. As the ship sponsor, Mrs. Donnelly marked the ceremonial birth of the ship. To watch highlights from the ceremony, click here.

Senator Donnelly said, “Jill and I were honored to take part in the keel-laying of the future USS Indianapolis. We are grateful for the officers and sailors who serve on these ships and the men and women who work so hard to build them. As we celebrate the building of this ship, we also pay tribute to the crew and survivors of the USS Indianapolis, who served and sacrifice for our country during World War II.” 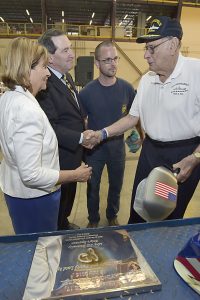 Dick Thelen, a World War II veteran and USS Indianapolis (CA-35) survivor, from Lansing, MI, was also in attendance. July 30, 2016, will mark the 71st anniversary of the sinking of the USS Indianapolis in WWII. The ship was torpedoed by a Japanese submarine in the Philippine Sea just days after delivering parts for the first atomic bomb to the United States air base at Tinian. Of the 1,196 aboard the Indianapolis at the time, 900 made it into the water in the twelve minutes before the ship sank. After almost five days floating in the Pacific, 317 survivors were rescued from the water. There are 23 survivors, including Thelen, who are still living.

I play on the radio from 7 am -1 pm weekdays on 98.9 FM WYRZ and WYRZ.org. Follow me on twitter @WYRZBrianScott or e-mail me at brian@wyrz.org.
Previous Governor Mike Pence Directs Flags Be Flown at Half-Staff Statewide to Honor Law Enforcement Officers Killed in Baton Rouge, Louisiana Shootings
Next Canada-Based Baked Goods Producer Picks Brownsburg for US Headquarters