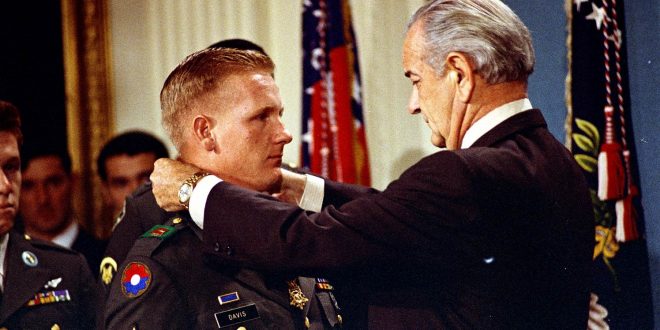 “Sammy’s story of service, courage and sacrifice for our nation and freedom is a true inspiration for all Americans,” Gov. Holcomb said. “In sharing his exceptional personal story, Sammy spreads an important and timeless message that grit and perseverance can help all of us overcome even the most challenging circumstances.”

The Sachem is given annually to recognize a lifetime of excellence and moral virtue that has brought credit and honor to Indiana. Previous recipients include Holocaust survivor Eva Mozes Kor (2017), Rev. Theodore M. Hesburgh, former president emeritus of the University of Notre Dame and world statesman (2006), and long-time businessman and civic leader P.E. MacAllister (2014). Sammy Davis will be the second Sachem honoree named by Gov. Holcomb.

Davis, 71, received the Congressional Medal of Honor from President Lyndon B. Johnson in 1968 for his “extraordinary heroism at the risk of his life.”

In 1967, then Army Pfc. Davis served as a cannoneer with the 4th Artillery Regiment of the 9th Infantry Division in South Vietnam. His unit fell under heavy machine-gun fire and mortar attack by the Vietcong while defending a firebase west of the city of Cai Lay.

Davis used a machine gun to provide cover for the members of his unit so they could return fire with artillery. Although wounded, Davis took over a burning howitzer and fired several rounds at the Vietcong. As a result, he sustained further injury—including a broken back. He then crossed a river on an air mattress to rescue his wounded comrades before joining another howitzer site to continue fighting the North Vietnamese until they fled.

He continued to serve throughout the Vietnam War, though his severe injuries kept him from the battlefield. Davis served out the remainder of the war as cook. He retired from the Army in 1984.

Davis is actively engaged in the Boy Scouts of America organization and entered scouting when he was nine. He is involved with many veteran and service organizations, church, the Masonic Lodge and is especially dedicated to speaking to America’s youth.

He and his wife, Dixie, live in Freedom, Indiana. They have both authored books about their life experiences and the importance of endurance and courage.

Davis’ motto throughout his life is also the title of his book: You Don’t Lose ‘Til You Quit Trying.

In 1970, Gov. Edgar D. Whitcomb introduced the “Confederacy of the Sachem,” a group of business, industry, publishing, banking and legal leaders, who served as state hosts, welcoming visitors to Indiana and promoting the state’s culture and economy. The organization’s name came from the Algonquin term applied to village leaders, implying wisdom, judgment and grace.

Bylaws outlined that Sachems were to nominate and recommend Sagamore appointments to the governor. The Sagamore of the Wabash dates to the term of Gov. Ralph Gates in 1945 and has been the state’s highest honor bestowed by the governor.

Following Whitcomb’s term, the Sachem project was not pursued, and the organization dissolved in 1989. Whitcomb visited Gov. Daniels in 2005 to acquaint him with the concept and to give him custody of remaining Sachem funds. Gov. Daniels recreated the Sachem to underscore the importance of moral example; achievement alone without exemplary virtue does not qualify a person for this recognition.

Twelve Sachem awards have been bestowed since the honor was revived in 2005:

Each Sachem honoree receives a specially designed sculpture that captures the Native American heritage of the Sachem. All Sachem recipients are selected by Indiana’s governor.

I play on the radio from 7 am -1 pm weekdays on 98.9 FM WYRZ and WYRZ.org. Follow me on twitter @WYRZBrianScott or e-mail me at brian@wyrz.org.
Previous Hendricks County Community Foundation Announces 2018 Lilly Endowment Community Scholars
Next Bolt For The Heart Donates 90 Automatic External Defibrillators