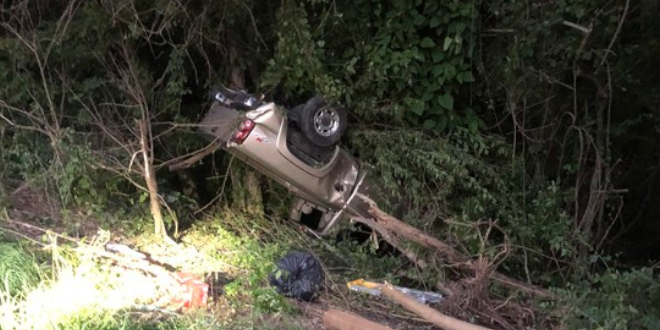 Edinburgh, IN – Tuesday evening, just after 6:00, emergency crews were dispatched to the scene of a serious crash on I-65 southbound at the 82.2 mile marker in Johnson County. Upon arrival, first responders discovered Samaritans had pulled the driver of the pick-up from the wreckage and were performing CPR. Despite life saving efforts the driver of the pick-up was pronounced deceased at the scene. The other vehicle involved in the collision was a semi tractor-trailer, that driver was not injured.

Investigators believe a white Chevrolet Cobalt with either Illinois or Kentucky license plates was driving recklessly, speeding, weaving in a and out of traffic, braking suddenly in front of vehicles and giving hand gestures to other drivers. The driver of the white Cobalt allegedly pulled in front of the pick-up truck and suddenly braked. The pick-up then swerved to the right to avoid collision and was struck by the semi. The impact of the collision caused the pick-up to strike a guardrail and overturn. Alcohol or impairment is not suspected in either the driver of the pick-up or the semi.

We area asking for the public’s assistance: Anyone who may have been traveling in the area of I-65 between Indianapolis and Columbus Indiana between the hours of 8:00 p.m. and 8:45 p.m., who has a vehicle equipped with a dash camera, is asked to review their footage for a white Chevrolet Cobalt with Illinois or Kentucky License plates.

I play on the radio from 7 am -1 pm weekdays on 98.9 FM WYRZ and WYRZ.org. Follow me on twitter @WYRZBrianScott or e-mail me at brian@wyrz.org.
Previous Visit Indiana’s The 20 IN 20; Drive-In Theaters
Next Body of Greenfield man recovered from pond in Hancock County