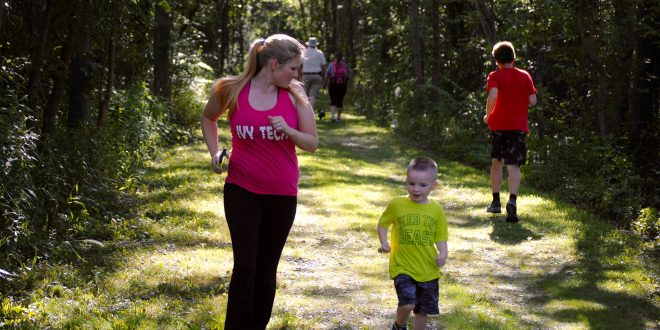 While parks provide a significant economic impact to communities, they also play a major role in health and wellness, offering free or inexpensive ways to improve a variety of common physical and mental health concerns.

Indiana is the 15th-most obese state in the 18th-most obese country in the world. National health care costs relating to obesity range between $147 billion and $210 billion annually. The Indiana State Department of Health has identified poor diet and lack of physical activity as the second-leading cause of death among Hoosiers.

Over 70 million American Baby Boomers – and more than 1.5 million Hoosier Baby Boomers – are reaching an age where conditions such as high blood pressure and osteoarthritis become an increasing concern.

Soldiers returning from military service – and others who have experienced a shocking, scary or dangerous event – are fighting Post-Traumatic Stress Disorder (PTSD) in numbers that total around 8 million Americans each year. Estimates range between 10,000 and 70,000 Hoosier veterans who have PTSD.

Roughly 40 million American adults suffer from some sort of anxiety disorder – at a cost of around $79 billion annually – including PTSD and depression. Nearly two million of those Americans are Hoosiers.

Over 6 million children in the United States have been diagnosed with Attention-Deficit/Hyperactivity Disorder (ADHD). Thirteen percent of Indiana children suffer from ADHD while nearly 10 percent take medication for it. Both percentages rank fourth-highest in the country.

These are but a few of the physical and mental health issues facing Americans that can be aided by ecotherapy, also known as green therapy or nature therapy – or, very simply, contact with nature.

Research has shown that the combination of nature and exercise results in substantial improvements in mood and self-esteem, as well as a significant decrease in tension, anger, anxiety and depression – at higher rates than indoor exercise. Outdoor exercise also improves fitness and mobility while positively impacting several other physical conditions.

While ecotherapy is a relatively new concept, the body of research showing its benefits is growing. Doctors are even writing prescriptions for time to be spent outdoors in nature to combat a wide variety of issues that include obesity, hypertension, PTSD, depression, ADHD and more.

Parks play a vital role in ecotherapy, whether a person is self-motivated or under a doctor’s orders to get outdoors and get active. Parks throughout Hendricks County offer green space in which to walk, run, hike and play, and parks departments also offer regular programming – most of it at low or no cost – designed to get Hoosiers of all ages and physical abilities moving. Additionally, admission to every park in Hendricks County is free.

One example of this programming is Hendricks County Parks & Recreation’s Summer Fun Run Series, which takes place from June through August each year. Participants in this series enjoy weekly, non-competitive opportunities to walk or run along one-mile or 5K courses at parks throughout the county, free of charge.

The department is also developing a recurring plein air painting program that will launch this summer, designed to get people outdoors and relaxing. These are just two programs offered by parks departments throughout Hendricks County and Indiana that can assist Hoosiers in improving their physical and mental health, as well as reducing health care costs, through ecotherapy.