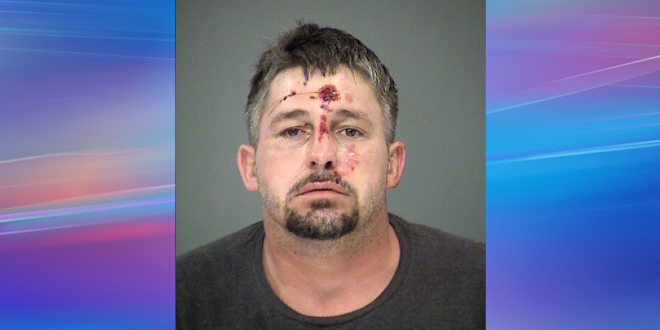 Officers Arrest Man for Breaking into Task Force One

INDIANAPOLIS –  Just after 3:20 a.m., on September 3, 2019, Officers of the Indianapolis Metropolitan Police Department were dispatched to  to investigate a business alarm at Task Force One Offices.

As officers were arriving, officers were notified there was a male inside the gated area walking through the vehicles. Officers located a male hiding under a vehicle.  The male then ran from the officers.  After a short foot pursuit, the officers apprehended the male after he tripped and fell.  He was identified as 39-year-old Anthony Wallace.

Officers located evidence, including tools used to cut through the fencing and used to remove items from vehicles in the lot.  Officers arrested Anthony Wallace for his alleged involvement in this incident.  The Marion County Prosecutor’s Office will review the case and make a charging decision.

Officers were working extra patrols on this location due to members of Task Force One being deployed for hurricane relief.

Anyone with information about this incident should call 317.327.3475 or Crime Stoppers of Central Indiana at 317.262.8477 or (TIPS).  Citizens can also download the mobile P3tips app for Apple or Android phones to submit a mobile tip, or go to www.CrimeTips.org to submit a web tip. You will remain anonymous and may be eligible for a cash reward of up to $1000 if the information leads to a felony arrest.  Only tips submitted directly and anonymously to Crime Stoppers are eligible for these cash rewards.

I play on the radio from 7 am -1 pm weekdays on 98.9 FM WYRZ and WYRZ.org. Follow me on twitter @WYRZBrianScott or e-mail me at brian@wyrz.org.
Previous Lafayette Dog Selected as 2020 Early Times All-American Dog
Next Final victim located in White River