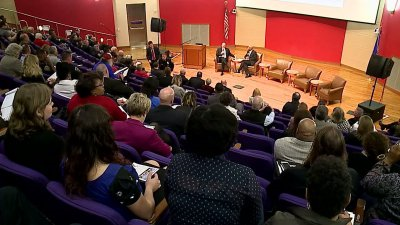 INDIANAPOLIS – Many cities across the country are facing challenges in law enforcement practices and community relations. Wednesday, experts and leaders from Indianapolis and other cities examined the relationship among police, communities, and citizens at a National Public Safety Forum focused on Policing and Community Relations.

“As a former federal prosecutor, I know the importance of collaboration across all levels of public safety,” said Indianapolis Mayor Joe Hogsett. “By bringing together thought leaders from across the country, we have the opportunity to learn from one another, and identify ways to better serve the people of Indianapolis.”

“Indianapolis is a major city and there is no reason we can’t be a leader in these discussions. We need to talk about this as a city and we need to talk about best practices,” said Indianapolis Metropolitan Police Chief Troy Riggs. “Having citizens willing to work with police is how we solve crimes in our community and communities around the nation.”

Chief Riggs said Indianapolis has been fortunate not to have any major incidents such as other cities have experienced. Denver Police Chief Robert C. White agrees.

“We are always looking for ways to foster our relationship with our community through positive interactions, so if something goes wrong we are trusted to handle the situation in the proper manner,” Chief White said. “If they know you, if they trust you, if you treat everyone with dignity and respect, an environment of collaboration and cooperation is created, positioning us as a community to better prevent crime.”

Jeremy Carter, Asst. Professor of Criminal Justice at the IU School of Public and Environmental Affairs, said the forum exemplified the “demonstrable commitment from Indianapolis stakeholders to engage in an open and active dialogue about issues central to public safety.”

“Attendees and participants alike had the opportunity to learn about contemporary policing issues, best practices, and lessons learned,” Carter said. “The combination of panelists and vested community members were able to articulate a path forward for Indianapolis public safety that translates rhetoric into operational solutions.”

According to Brian Buchner, President of the National Association for Civilian Oversight of Law Enforcement (NACOLE), “civilian oversight has evolved into something far broader than the review of police disciplinary decisions or individual investigations of police misconduct.”

“Given the national attention on policing and the strained or broken relationships between police and communities, and particularly communities of color, bringing together experienced professionals in a forum such as this, is of upmost importance to the national conversation on public safety, as well as to the conversations happening in city halls and communities across the country.”

NACOLE is a non-profit organization that works to enhance accountability and transparency in policing and build community trust through civilian oversight.

Forums such as this are important in today’s world, said Dr. David Carter, Professor of Criminal Justice at Michigan State University. Carter authored an after action report on the police response to the Ferguson, MO unrest in 2014.

“American policing is going through a transformation right now and a key component of that transformation is community members who are demanding accountability and responsiveness to their needs and concerns,” he said. “This forum contributes to that need and creates an open dialogue that is needed.”

The goal is to continue the national dialogue surrounding issues of importance to communities. Planning for additional forums is underway.

I play on the radio from 7 am -1 pm weekdays on 98.9 FM WYRZ and WYRZ.org. Follow me on twitter @WYRZBrianScott or e-mail me at brian@wyrz.org.
Previous Indiana Small Business Development Center and Ball State University Partner to Assist Entrepreneurs in East Central Indiana
Next Brownsburg Achieves Tree City USA Status