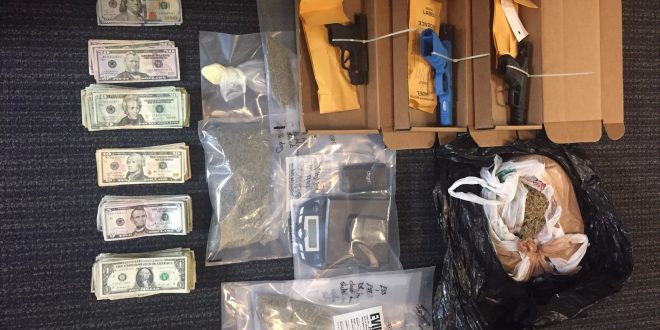 INDIANAPOLIS – Indianapolis Metropolitan Police Department (IMPD) Downtown Narcotics detectives and Flex Team officers executed three search warrants which led to the confiscation of 5 handguns, nearly 10 pounds of synthetic marijuana, over $5,000 in cash, several drug paraphernalia items and four arrests. These arrests were as a direct result of an ongoing investigation of the Wheeler Mission overdoses that occurred on January 30, 2018.

PD18019300, 02/22/2018 at 2:45 p.m., 500 block North Keystone Avenue.
Narcotic Detectives assisted Marion County Probation Officers who were monitoring Antonio Lamb (26).  When unlawful items were observed, detectives obtained a search warrant for the residence.  During the execution of the search warrant detectives seized a large plastic tub filled with an estimated 7 pounds of synthetic marijuana/spice, a separate bag of the drug, marijuana, and a loaded handgun. Mr. Lamb was arrested and charged with dealing of a synthetic drug, escape, possession of a synthetic drug, and possession of marijuana.

Day/Tact and Late/Tact Bike Units assisted our Narcotic Detectives during these successful investigations.  Their efforts are truly making the Downtown District a safer place for all.

The IMPD continues to fight illegal drug possession and unlawful gun possession.  The IMPD has and will always place the safety of all citizens of Indianapolis as the top priority.  The IMPD will put forth all of the available resources to identify and arrest those responsible for illegal drug possession, dealing, and illegal handgun possession.  This was a great example of the wonderful teamwork within the IMPD that happens daily.  The IMPD will continue to work with the community to make Indianapolis a safer place for all citizens throughout the city!

IMPD continues to urge anyone with information to call Crime Stoppers of Central Indiana at 317.262.8477 or (TIPS). Citizens can also download the mobile P3tips app for Apple or Android phones to submit a mobile tip, or go to www.CrimeTips.org to submit a web tip. You will remain anonymous and may be eligible for a cash reward of up to $1000 if the information leads to a felony arrest.  Only tips submitted directly and anonymously to Crime Stoppers are eligible for these cash rewards.

I play on the radio from 7 am -1 pm weekdays on 98.9 FM WYRZ and WYRZ.org. Follow me on twitter @WYRZBrianScott or e-mail me at brian@wyrz.org.
Previous Tech-Based Fleet Management Company Doubling Footprint, Jobs in Indianapolis
Next Aggravated Assault detectives responded to the 600 block of Eugene Street regarding two people shot