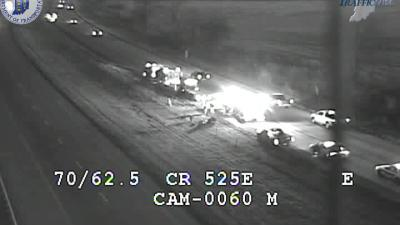 Motorcyclist Seriously Injured in Crash on I-70

Early this morning, December 10th, at approximately 6:40 a.m., Indiana State troopers were notified of a serious personal injury crash on I-70 EB at the 62.6mm involving a motorcyclist.

Preliminary investigation revealed that James Jones, 58, of Monrovia, IN was operating a 2005 BMW motorcycle that had become disabled. Jones was sitting on the disabled motorcycle on the left side of I-70 on the pavement near the yellow line. The motorcycle reportedly did not have any lights in operation. Ronald Thomas, 48, of Monrovia, IN was operating a 2013 dump truck in the left lane and did not observe the motorcycle until it was struck by the left front of the dump truck.

Jones suffered a severe leg injury and was transported to Eskenazi Hospital. Thomas was not injured.

During the cleanup of the wreckage, medics were summoned to return to the crash scene to attend to an employee of Zores wrecker service that was injured while hooking up to the dump truck. Chad Nickle, 38, of Indianapolis, was working under the front of the dump truck hooking up to the wrecker when the dump truck fell off of wooden blocks that had been placed under the left front wheel. Trooper John Myers and Trooper Jessie Schmidt pulled Nickle out from under the dump truck and summoned medical assistance. Nickle was alert and conscious and was transported to Methodist Hospital to be treated for a complaint of back pain.

The left lane of I-70 EB at the 62.6 mm was closed for approximately two hours while the crash was investigated and the wreckage cleared.